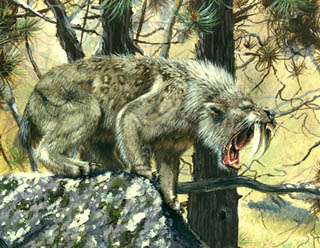 The word MAMMAL describes the very characteristic that sets this class of vertebrates apart from all others.  "Mammal" is derived from the Latin word 'mamma', which means breast.  Unique to these creatures, all female members of each species possess mammary glands, and nurture their young with their milk.  Another chief characteristic is the presence of hair.  Hair aids mammals to maintain a constant body temperature which is also a mammalian characteristic.  Of all vertebrates, mammals can sustain the longest duration of activity regardless of how adverse the surrounding environment is provided an ample food energy source is available.

The first mammals emerged in the Late Triassic Period, 220 million years ago, but never gained a dominant presence and broad diversity until the Miocene Period, 15 million years ago.  The warming and cooling of the earth during the Great Ice Age of the Pleistocene, 2 million years ago, gave rise to the emergence of enormous land mammals.  All of these impressive beasts died out during the Pleistocene Era, about 12,000 years ago.  During the Pleistocene, gigantism among many mammals was the rule.  There were elephant-size mastodon and woolly mammoth, a 5 ton ground sloth called Megatherium, measuring 20 feet long, a giant beaver Castoroides, that grew as big as a bear and bison with horns that spanned 10 feet across! 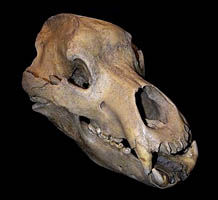 Another area of intense interest is that of the large carnivores.  All mammals of the large order Carnivora are carnivores or "meat-eaters" although not all carnivores just eat meat.  They are identified by their characteristic pair of meat-slicing teeth known as 'carnassial teeth'.  All but one type of toothed-whales are excluded from this order.  There was the giant cave bear Ursus spelaeus, Canis dirus - the ferocious dire wolf, and most notorious of all, the terrifying saber cats such as Smilodon with a jaw that could open 120 degrees, allowing its massive pair of saber teeth in its upper jaws to be driven into its unfortunate victim.

During the Triassic, the earliest known mammals looked like small rodents and belong to a subclass called Prototheria.  The only survivors of this subclass today are the Spiny Anteater and the Duckbilled Platypus.  Throughout the era of dinosaurs ruling the planet, mammals only existed as small shrew-like creatures.  It wasn't until close of the Cretaceous and the final demise of the dinosaurs 65 million years ago that mammals shared the planet with flowering plants, insects, and birds as the dominant life forms.  By the Eocene, around 50 million years ago, mammalian development gave rise to many of the forerunners of today's animals.

Land mammal fossils that are most common are teeth and bones.  Rarely are fossil skeletons found in full articulation.  Most fossils are discovered in isolated finds although mass extinction events can cause fossil-bearing deposits that are rich bones beds of numerous complete animals.

This section is dedicated to LAND MAMMALS.  Marine mammals such as whales, are featured in the MARINE VERTEBRATES SECTION.