SKU:
LMX179
ID:
Ovibos moschatus
FOUND:
Gold Dredge in a Fjord - South Alaska Coastline, USA (see marked map)
AGE:
PLEISTOCENE: 200,000 - 20,000 years
SIZE:
18.5" long x 10.5" wide
CONDITION:
NO REPAIR OR RESTORATION. ALL TEETH ORIGINAL.
NOTE:
NOT TO BE CONFUSED WITH HOLOCENE (MODERN) SKULLS WHICH ARE NOT RARE! THIS IS A TRUE PLEISTOCENE FOSSIL FOUND ON THE OPPOSITE SIDE OF ALASKA WHERE ANCIENT MUSK OX ONCE LIVED, AND DREDGED DEEP FROM THE BOTTOM OF THE OCEAN FLOOR IN A FJORD.
:::
Includes Lifetime Certificate of Authentity, Condition / History Sheet

While it is not rare to find Holocene (antique or modern) Musk Ox skulls in Siberia (Russia) or Alaska, finding one that IS A TRUE PLEISTOCENE FOSSIL from NORTH AMERICA, is so rare, it truly would be a "Holy Grail" specimen for any Ice Age museum collection.  Ask any paleontologist and they will agree that Ice Age specimens of the Musk Ox are scarce!  This fossil skull was found many years ago off the southern coast of Alaska by a gold dredge working in a Fjord.  It was buried deep in the ocean floor sediments of the fjord and such a provenance, as well as the fact that it was found on the OPPOSITE COAST of where even ancient Musk Ox once lived, rules out the possibility it could be Holocene.  Furthermore, the extremely heavy weight, density, color and dentition pigment all lend itself to this being a true Ice Age provenance.  It is in fantastic condition nearly complete, missing only the tip of one horn core and part of the nasal and premaxilla.  The teeth are original and the skull was found with the teeth as shown.

When we received it, it was still in its 'as found' state so we completely cleaned and micro-blasted the specimen in our lab.  Every crevice was packed with gravel pebbles and sediment, and the procedure required extensive time but was worth the effort as the result was exposing a skull with amazing detail still preserved.  The color is something to behold in person and it really gives the skull an incredible, unique beauty all its own.  We fully cleaned and conserved this skull in our lab and can certify it has NO REPAIR, RESTORATION OR ALTERATIONS.

We have never seen another FOSSIL Musk Ox skull from the Ice Age of North America, only antique and ancient examples.  For a museum or highly advanced private collection hoping to exhibit the a rare fossil skull of Ice Age North America, this specimen would be a "crown jewel" part of the collection and a great candidate for scientific publication.  The Musk Ox coexisted with prehistoric humans and was a vital game animal that provided nourishment and other resources for clothing and tools.  Living alongside Ice Age hunters in North America, it is likely they were equally revered and respected as taking one down with primitive weapons must have surely been a feat in prehistory!

Below is a map showing the difference of where modern Musk Ox lived versus where this skull was collected, evidence of its prehistoric origin. 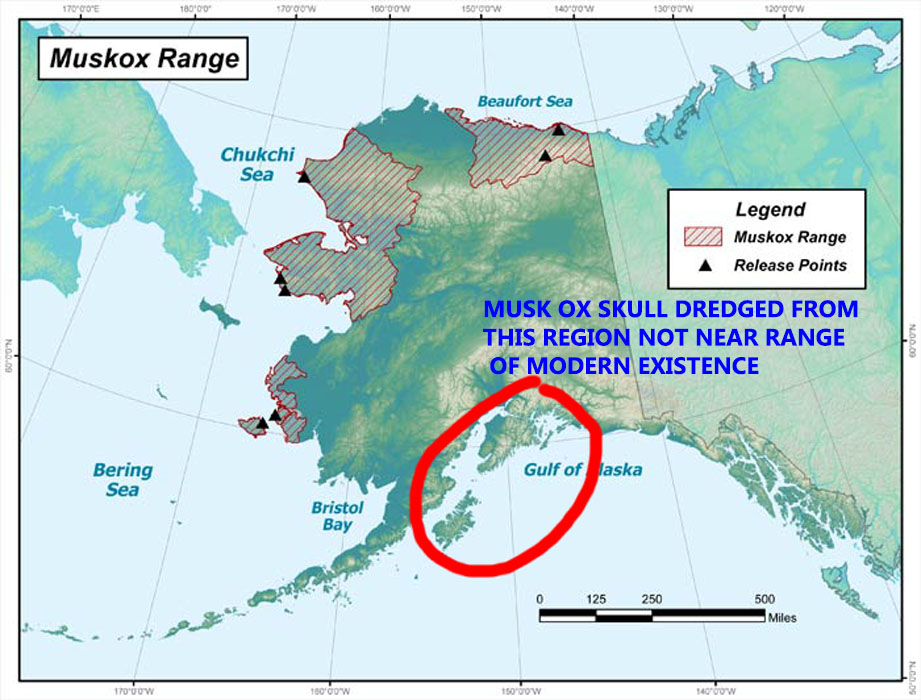 Muskoxen ancestors with sheep-like high-positioned horns (horn cores being mostly over the plane of the frontal bones, rather than below them as in modern muskoxen) first left the temperate forests for the developing grasslands of Central Asia during the Pliocene, expanding into Siberia and the rest of northern Eurasia. Later migration waves of Asian ungulates that included high-horned muskoxen reached Europe and North America during the first half of the Pleistocene. The first well known muskox, the "shrub-ox" Euceratherium, crossed to North America over an early version of the Bering Land Bridge two million years ago and prospered in the American southwest and Mexico. Euceratherium was larger yet more lightly built than modern muskoxen, looking like a giant sheep with massive horns, and preferred hilly grasslands.

A genus with intermediate horns, Soergelia, inhabited Eurasia in the early Pleistocene, from Spain to Siberia, and crossed to North America during the Irvingtonian (1.8 million years to 240,000 years ago), soon after Euceratherium. Unlike Euceratherium, which survived in America down to the Pleistocene-Holocene extinction event, Soergelia was a lowland dweller that disappeared fairly early, displaced by more advanced ungulates, such as the "giant muskox" Praeovibos (literally "before Ovibos"). The low-horned Praeovibos was present in Europe and the Mediterranean 1.5 million years ago, colonized Alaska and the Yukon one million years ago and disappeared half a million years ago. Praeovibos was a highly adaptable animal that appears associated with cold tundra (reindeer) and temperate woodland (red deer) faunas alike. During the Mindel glaciation 500,000 years ago, Praeovibos was present in the Kolyma river area in eastern Siberia in association with many Ice Age megafauna that would later coexist with Ovibos, in the Kolyma itself and elsewhere, including wild horses, reindeer, woolly mammoth and stag-moose. It is debated, however, if Praeovibos was directly ancestral to Ovibos, or both genera descended from a common ancestor, since the two occurred together during the middle Pleistocene. Defenders of ancestry from Praeovibos have proposed that Praeovibos evolved into Ovibos in one region during a period of isolation and expanded later, replacing the remaining populations of Praeovibos.

Two more Praeovibos-like genera were named in America in the 19th century, Bootherium and Symbos, which are now identified as the male and female forms of a single, sexually dimorphic species, the "woodland muskox", Bootherium bombifrons. Bootherium inhabited open woodland areas of North America during the late Pleistocene, from Alaska to Texas and maybe even Mexico, but was most common in the Southern United States, while Ovibos replaced it in the tundra-steppe to the north, immediately south of the Laurentian ice sheet.

Modern Ovibos appeared in Germany almost one million years ago and was common in the region through the Pleistocene. By the Mindel, muskoxen had also reached the British Isles. Both Germany and Britain were just south of the Barents-Kara Ice Sheet and covered in tundra during cold periods, but Pleistocene muskoxen are also rarely recorded in more benign and wooded areas to the south like France and Green Spain, where they coexisted with temperate ungulates like red deer and aurochs. Likewise, the muskox is known to have survived in Britain during warm interglacial periods.

Today's muskoxen are descended from others believed to have migrated from Siberia to North America between 200,000 and 90,000 years ago, having previously occupied Alaska (at the time united to Siberia and isolated periodically from the rest of North America by the union of the Laurentide and Cordilleran Ice Sheets during colder periods) between 250,000 and 150,000 years ago. After migrating south during one of the warmer periods of the Illinoian glaciation, non-Alaskan American muskoxen would be isolated from the rest in the colder periods. The muskox was already present in its current stronghold of Banks Island 34,000 years ago, but the existence of other ice-free areas in the Canadian Arctic Archipelago at the time is disputed.

ID Ovibos moschatus
FOUND Gold Dredge in a Fjord - South Alaska Coastline, USA (see marked map)
AGE PLEISTOCENE: 200,000 - 20,000 years
SIZE 18.5" long x 10.5" wide
CONDITION NO REPAIR OR RESTORATION. ALL TEETH ORIGINAL.
NOTE NOT TO BE CONFUSED WITH HOLOCENE (MODERN) SKULLS WHICH ARE NOT RARE! THIS IS A TRUE PLEISTOCENE FOSSIL FOUND ON THE OPPOSITE SIDE OF ALASKA WHERE ANCIENT MUSK OX ONCE LIVED, AND DREDGED DEEP FROM THE BOTTOM OF THE OCEAN FLOOR IN A FJORD.
:: Includes Lifetime Certificate of Authentity, Condition / History Sheet