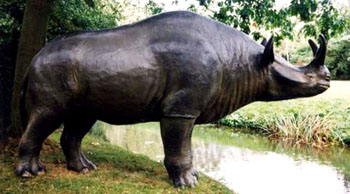 The Brontotherium lived in herds in a habitat of scrubby woodlands which dominated their region back in the Early Oligocene.  It is believed as the climate changed and these woodlands slowly became open grasslands, the Brontotherium died out because their diet was not able to be sustained by their new environment.  During the peak of their existence, volcanic activity in the area was very heavy and entire herds were subsequently buried and have been found fossilized in deposits of volcanic ash from millions of years ago.

In the Badlands of South Dakota and Nebraska, the Sioux Indian tribes revered these beasts in their ancient mythology.  They believed that when these beasts galloped across the sky, thunder was created hence the name "Thunder Beasts" which is what the name 'Brontothere' means.  They were massive beasts, 8 feet high at the shoulders, and were larger than a modern day Rhino.  Prominently rising from the snout of these creatures was a giant growth made up of compacted hair like a modern Rhino horn is constructed.  This Y-shaped protrusion swept upward and back, reaching higher than the rear of the head.