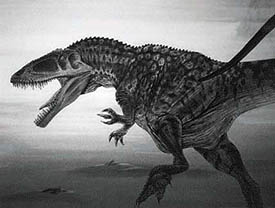 In 1925, Carcharodontosaurus fossils were first found by Charles Depéret and J. Savornin in Algeria.  The remains consisted of a partial skull, teeth, cervical and caudal vertebrae, a manus ungual, an ilium, a pubis, a femur, and a fibula.  The femur measured 1.26 meters.  The original name was Megalosaurus saharicus but was later renamed by German paleontologist Ernst Stromer to Carcharodontosaurus.  Further fossils were later discovered and collected from Morocco and Niger.  During World War II, the holotype fossils of this dinosaur were being studied in Germany but were destroyed by Allied bombing.  Based on studies of older and recent remains, scientists believe the genus Carcharodontosaurus includes some of the longest and heaviest known carnivorous dinosaurs that ever lived on land.