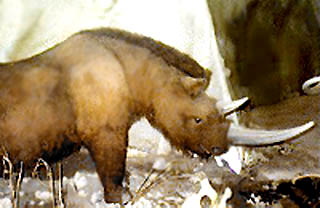 Beginning in the Middle Pleistocene in Asia , the Woolly Rhinoceros, known scientifically as  Coelodonta antiquitatis, migrated into Europe and became well-suited to the harsh environment there that existed in our last Ice Age.  The animal's massive body and long, shaggy fur allowed it to withstand the severe cold and barren land as it fed on vegetation of the steppe and tundra of Eurasia.

The Woolly Rhino grew to 11 feet in length and stood 6 feet at its shoulders.  It had a huge pair of horns that grew inline on its snout.  The front horn grew to lengths in excess of 3 feet.  Like modern rhinos, Woolly Rhinoceros had horns composed of keratin.  Unlike the hollow horns of cows, rhino horns are made of fused hair that are solid throughout.  The fibers are attached to the snout by skin supported by a raised, roughened area on the skull.

Woolly Rhinoceros are clearly shown in cave paintings in southern France around 30,000 years ago.  Hunting these animals would have been extremely dangerous given the beast's violent temperament and size coupled with its weaponry of its two horns.  Like the cave bear, these deadly creatures were revered and were quite a trophy upon a successful hunt.

Their eventual extinction is believed to have been caused by their inability to cope with the warming climate that marked the close of the last Ice Age.  Woolly rhinoceros fossils have been found in northern regions of Asia (Siberia) and Europe.