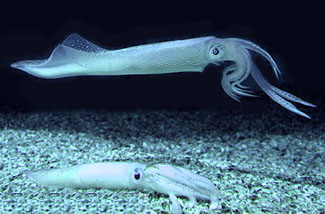 Prehistoric 'straight' cephalopods include straight ammonoids called BACULITES, and straight nautiloids called ORTHOCERAS and BELEMNITES.  Cephalopods evolution began during the Late Cambrian Period.  Cephalopod bodies were predominantly elongate with conical shells.  Some of these creatures evolved into semi-coiled forms eventually giving rise to coiled cephalopods like ammonites and nautili.  Another branch of straight-shelled cephalopods continued to coexist with the coiled forms on into the Pennsylvanian Period.  These straight forms were much less diverse and abundant than the coiled cephalopods, as a whole.

Orthoceras and belemnites were among the most advanced invertebrates of their time having eyes, jaws, and a sophisticated nervous system.  These creatures were predators that swam freely using a jet propulsion system by squirting water from their bodies.  They had tentacles and ink sacs also much like the present-day squid.   Except for belemnites, cephalopods had external shells with hollow internal chambers separated by walls called septa.  A tube called the siphuncle, connected the body with the chambers allowing the animal to fill them with water or air, changing its buoyancy in order to rise or drop in the ocean.  Only the last and largest chamber was occupied by the living animal.  Belemnites were different in that they had internal shells called 'guards' which were covered with the soft, muscular tissues of their bodies.  These shells were also chambered but much less complex than the straight varieties of nautiloids and ammonoids. 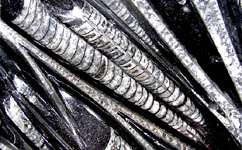 Orthoceras and belemnites probably lived for one to six years, with the majority living two to four years. They fed on plankton (tiny free-floating organisms), sea lilies, and smaller orthoceras. Although many fed off the ocean floor, others may have caught plankton while floating or swimming via jet propulsion, expelling water through a funnel-like opening to propel themselves in the opposite direction. Because orthoceras and belemnites lived exclusively in marine environments, their presence as fossils indicates the location of prehistoric seas.

A famous and very large fossil deposit of prehistoric straight cephalopods known as ORTHOCERAS, can be found in Morocco, North Africa.  Hundreds of millions of years ago, this region was covered by ocean and as they died, their shells accumulated in great numbers on the sea floor where they were aligned by currents, buried by sediments, and transformed over the ages into stone.  Today, this prehistoric sea floor is now part of the dry, desolate Atlas Mountain Range in southern Morocco, at the northern fringe of the Sahara Desert.