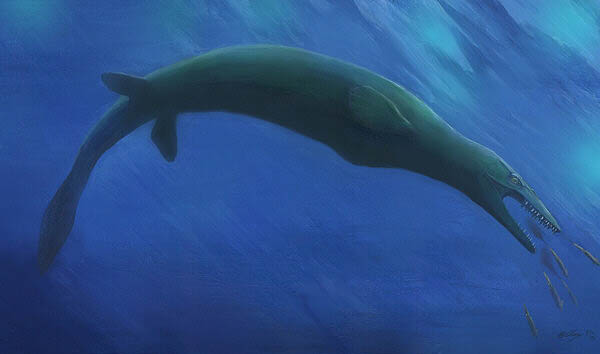 Mosasaurs were the largest lizards that ever evolved and  attained lengths of almost 60 feet with a skull 6 foot long!  The mosasaur was a powerful swimmer who spent its entire life in the sea. Mosasaurs had long and powerful bodies whose tails and limbs were adapted for swimming.  They probably swam by moving their long body in a snake-like way, also using their finned tail to propel them forwards. They steered with small, webbed feet.

Mosasaurs had long heads, strong and flexible necks and hydrofoil-like limbs. Their large jaws had stabbing teeth and had a hinge in the mid-lower jaw similar to modern day constrictor snakes.     This enabled them to swallow huge prey.  What is even more amazing about these creatures is that they had curved teeth on the ROOF of their mouth just before their throat!  Any prey still attempting to escape their massive jaws would be firmly held by these teeth just prior to being swallowed whole.  The teeth in the jaws of the mosasaur were deeply lodged into the jaw-bone.  This tells us that there was huge power in the bite to necessitate such well-anchored teeth. It’s believed that the bite force of the mosasaur was AT LEAST equal to that of a Tyrannosaurus rex!

Mosasaurs ate large fish, shellfish, sharks and some ate mollusks.  They lived during the same period T. rex roamed the earth.     Mosasaurs can easily be considered the T. rex of the prehistoric seas!  Such creatures were true hunter-killers that had no rival during their existence.

Mosasaur fossils have been found in many regions all over the globe.