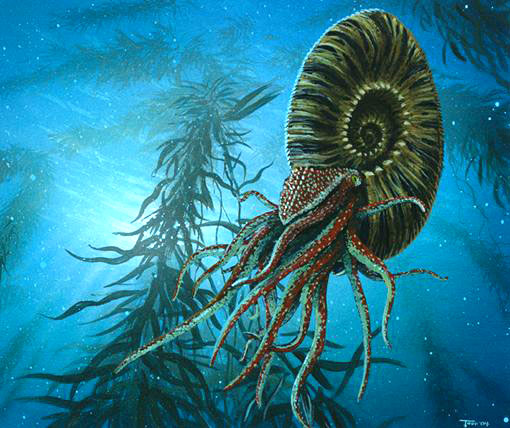 Ammonites are extinct invertebrates and belong to the subclass Ammonoidea, class Cephalopoda.  They shared the same fate as the dinosaurs and died out at the end of the Cretaceous Period, 65 million years ago.  Modern relatives of ammonites include the nautilus, squid, cuttlefish and octopus.  Ammonites first appeared during the Middle Devonian Period around 400 million years ago.  They became especially abundant and widespread in the seas of the Jurassic and Cretaceous periods, 175 million to 65 million years ago.  Ammonites were so plentiful throughout various stages of geologic history that scientists use them as INDEX FOSSILS whereby the presence of certain types in a rock layer can denote a specific time period.

Ammonite fossils are mostly casts or flattened compressed impressions of the former outer shell which left a cavity that served as the mold when first buried in prehistory.  If three-dimensional, these fossils may also contain remnants of the internal chamber anatomy sometimes seen if sliced open.  In most cases, the actual outer shell is gone.  Some rare instances in the fossil record show preserved ammonites that have retained the actual outer shell of the animal.  These ammonites may still retain original coloring which may display pearl essence or iridescent phenomena due to the presence of the original mother-of-pearl layer in the fossilized shell.

Ammonites were mollusks with shells that were predominantly tightly coiled on a single plane like a wheel.  These are called HOMOMORPHS.  There are also other varieties called HETEROMORPHS which include members that have open helical-coiled and irregular-coiled shells, as well as straight shell examples.  The soft-bodied animal living in this shell most-likely resembled an octopus but with shorter arms.  Fossils are few and rare showing any soft body tissue so the concept of what the soft parts of these creatures looked like is speculative.  Only the last and largest chamber was occupied by the living animal.  As it matured and grew, larger chambers were added at the opening.

Three major types of suture patterns are found in ammonites:

Goniatitic - numerous undivided lobes and saddles; typically 8 lobes around the conch. This pattern is characteristic of the Paleozoic ammonoids.

Ceratitic - lobes have subdivided tips, giving them a saw-toothed appearance, and rounded undivided saddles. This suture pattern is characteristic of Triassic ammonoids and appears again in the Cretaceous "pseudoceratites".

Ammonitic - lobes and saddles are much subdivided (fluted); subdivisions are usually rounded instead of saw-toothed. Ammonoids of this type are the most important species from a biostratigraphical point of view. This suture type is characteristic of Jurassic and Cretaceous ammonoids, but extends back all the way to the Permian.

Ammonites varied greatly in size.  The largest known ammonites have been found in Europe and grew to massive sizes exceeding 2 meters (6.5 feet) across.  This is the exception, of course.  Average diameters throughout the ages showed that most ammonites grew to sizes not much larger than a man's hand.  Some ammonites were only as large as 2 cm (0.75 inches) in diameter.  The shells of ammonites had hollow chambers separated by walls called septa. A tube called the siphuncle, connected the body with the chambers allowing the animal to fill them with water or air, changing its buoyancy in order to rise or descend in the ocean water column.  The siphuncle in most ammonoids is a narrow tubular structure that runs along the shell's outer rim, known as the venter, connecting the chambers of the phragmocone to the body or living chamber.  This distinguishes them from living nautiloides (Nautilus and Allonautilus) and typical Nautilida, in which the siphuncle runs through the center of each chamber.  Shell designs varied from globular which were probably ammonite types that lived in slow-moving water or stayed close to the bottom of the sea bed, to very laterally compressed making them very hydrodynamic and thereby allowing them to swim swiftly.  Earlier varieties had smooth-walled, simple shells with more rudimentary internal chamber geometry.  In some cases, ammonite fossils are found in association with a small hard plate-like structure that was part of the anatomy of the ammonite.  This is called an aptychus and was initially believed to be a type of "door" that the ammonite could shut over the opening of its shell.  Current scientific theory now believes this structure was part of the jaws of the former living creature.  In rare instances, this structure is found fossilized in place at the opening of the fossil shell.  During the Jurassic Period, outer ornamentation dramatically increased with outward ribs, ridges and spines.  Internal chamber detail and suture patterns became much more intricate, as well.  By the Cretaceous Period, outer shell ornamentation developed into even more diverse and downright exotic anatomy.  Several ammonite types in the Cretaceous developed ornate arrays of spines and horns.  It is not known if this was for defense, sexual display or both.

Ammonites probably fed on plankton (tiny free-floating organisms), sea lilies, and smaller orthoceras.  Although some slow-moving varieties likely fed off the ocean floor, most were believed to be open-water swimmers and probably caught plankton while floating or swimming via jet propulsion, expelling water through a funnel-like opening to propel themselves in the opposite direction.

Because ammonites lived exclusively in marine environments, their presence also indicates the location of prehistoric seas.  Although, the fossil record shows that ammonites were in a steady decline before their final extinction, they died off completely at the end of the Cretaceous Period, 65 million years ago.  The extinction of the ammonites, along with other marine animals and non-avian dinosaurs, has been attributed to the K-Pg extinction event, marking the end of the Cretaceous Period.  One reason given for their disappearance is the Cretaceous ammonites had a similar reproductive pattern in which huge numbers of eggs were laid in a single batch at the end of the lifespan. Any eggs and juvenile ammonites would have been part of the plankton at the surface of the ocean, where they were killed off by the effects of the impact. The reason nautiloids survived and are alive today is believed to be a result of their different reproductive behavior in which eggs were laid in smaller batches many times during the lifespan, and on the sea floor, protected away from any direct effects of such the devastating impact felt on the surface.   - text and images copyright protected 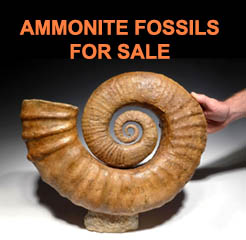