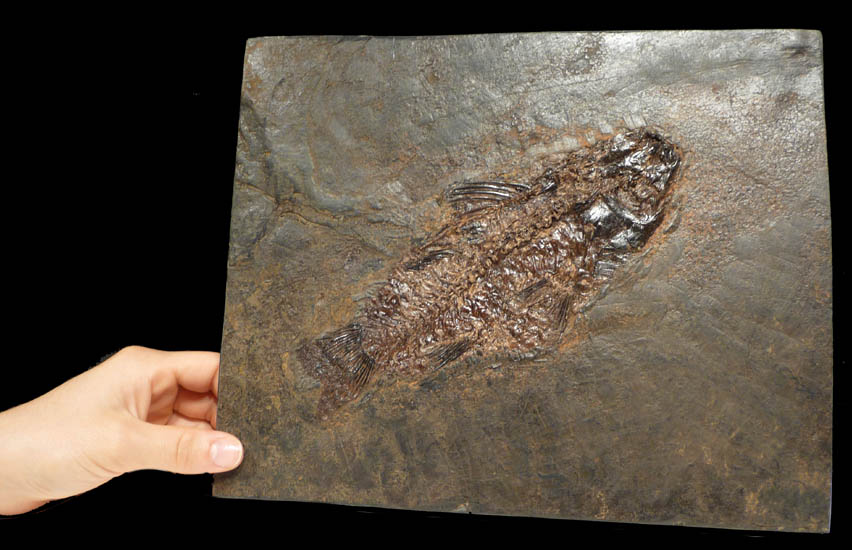 The Uniqueness of Fossils from the Messel Quarry

Before discussing replica fossils from this source, it is important to understand how the genuine specimens are prepared and conserved.  Since the oil shales from Messel are fragile and difficult to stabilize in the conservation of the fossils found there, the most common technique for extracting and presenting these fossils is by embedding the fossil in plastic resin on one side for a stable backing.  When the fossil is discovered in the field, resin is mixed and poured over the exposed layer.  The entire fossil with its reinforced resin backing is then removed from the ground and brought back to the lab where it is flipped over and prepared from the rock side which was the former layer facing down.  The preparation is done very carefully with manual tools and in some cases, light air abrasives.  The surrounding rock is removed to expose the layer holding the fossil and if done carefully, soft body tissue and other delicate features can be found preserved intact.  The resin is either colored or left natural and the fossil is stabilized with a clear preservant to prevent damage to its fragile features now that they are fully exposed.

There are some special warnings that apply to acquiring Messel fossils.  There are three types of fossils that sometimes appear on the market from this deposit that should be avoided due to their lack of value and authenticity.  Since the real fossils are prepared in resin, it is easy to create fakes or fossils made from the rock negatives where no real fossil substance exists.  These are worthless casts and it is important to be able to identify the difference.  The following Messel fossils are to be avoided and are nothing more than copies of the real thing.  One key factor to determining if the fossil is genuine is to look for crisp detail of the skeleton or soft body tissue under magnification.  Sometimes, the organic preserved remains retain a variation of colors.  AVOID DEALER INVENTORIES WHERE ALL THEIR MESSEL FOSSILS OF THE SAME TYPE OF ANIMAL LOOK THE SAME COLOR.  They are probably not real.

1. Messel fossils that have had all of their fossil material removed by improper lab preparation leaving only the plastic resin impression and not any real fossilized remains in the resin slab.  The substance is accidentally fully removed and then the fossil portion is colored to disguise the resin.

2.  Messel fossils that are pure resin positive impressions of the original negative rock layer, not the real fossil.  In other words, when the rock is split and the fossil is exposed, if you were to pour resin into the negative impression rock slab that split off, you can make an effective-looking fossil that is nothing more than a copy of the real one found on the other slab.  Unscrupulous collectors did this when it was possible for the public to access the pit so these "negative side" Messel fossils are out there and surface on the market from time to time.  The fossil region is colored to disguise the resin.

3.  Messel fossils that are pure resin copies made from a rubber mold of a genuine fossil.  Silicone will retain the finest detail and since the original fossil is embedded in resin, it is very easy to make a copy in resin, as well.  The fossil region is colored to disguise the resin.

The Traits and Features Only Seen in Genuine Messel Fossils

The following images are of an AUTHENTIC fish fossil from Messel that we prepared ourselves in our lab.  Extremely fine detail is evident and color is completely natural.  This is an exceptional specimen and actual skin tissue is still intact amongst the preserved bones.  Not all AUTHENTIC Messel fish fossils will be this nice but all authentic fossils will have some variation in color on the body or a definitively colored skeletal structure that can be seen to be different from the resin backing when the fossil is examined under magnification. 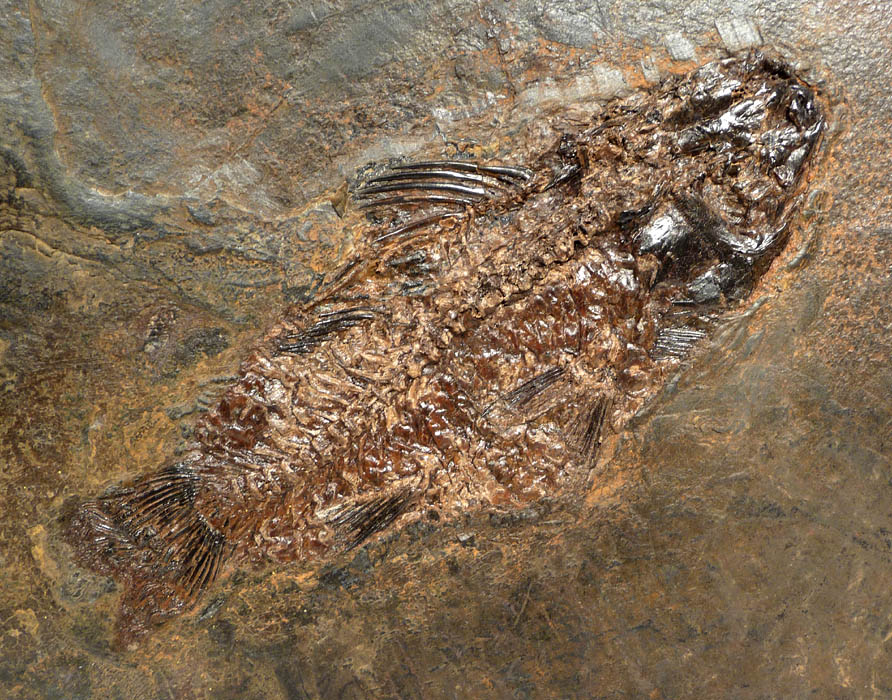 The caramel brown wrinkled areas on the body is the actual preserved skin of this fish.  Lighter material scattered at the base of the anal fin, around the vertebrae and over some portions of the body represents organic material that did not fully mineralize.  Thick spines and fin rays of this fine specimen mineralized in a shiny jet black with some hues of caramel brown.  This is a much nicer specimen than is usually found on the market so it should not be used as a minimum "litmus test" of singling out a real Messel fish fossil from a fake.  Still, you must be able to see definitive fossilized material separate from the backing resin when examined under magnification.  The photos above and below show only authentic anatomy and substance in this 100% AUTHENTIC specimen. 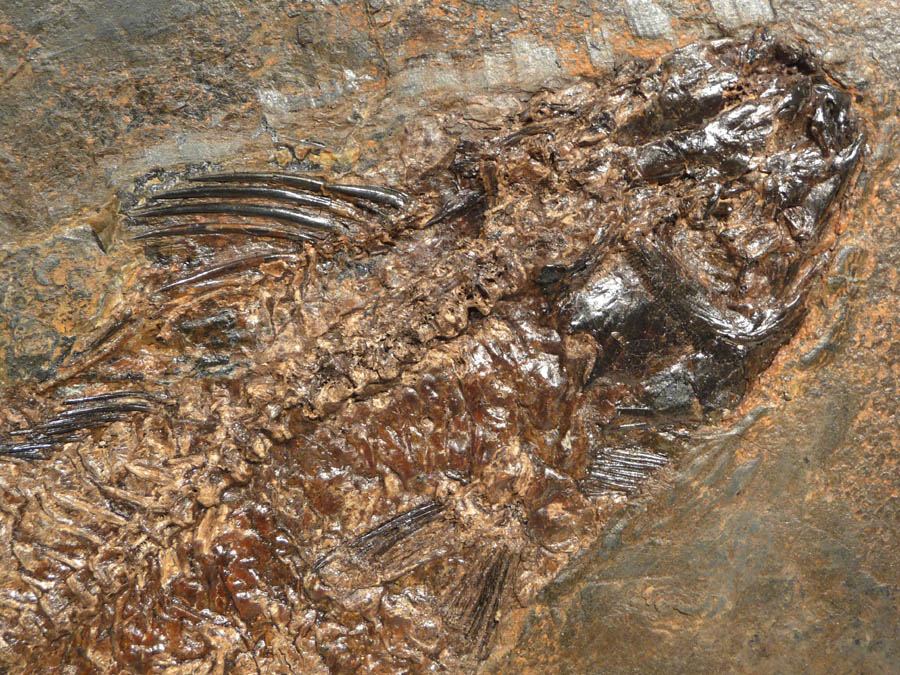 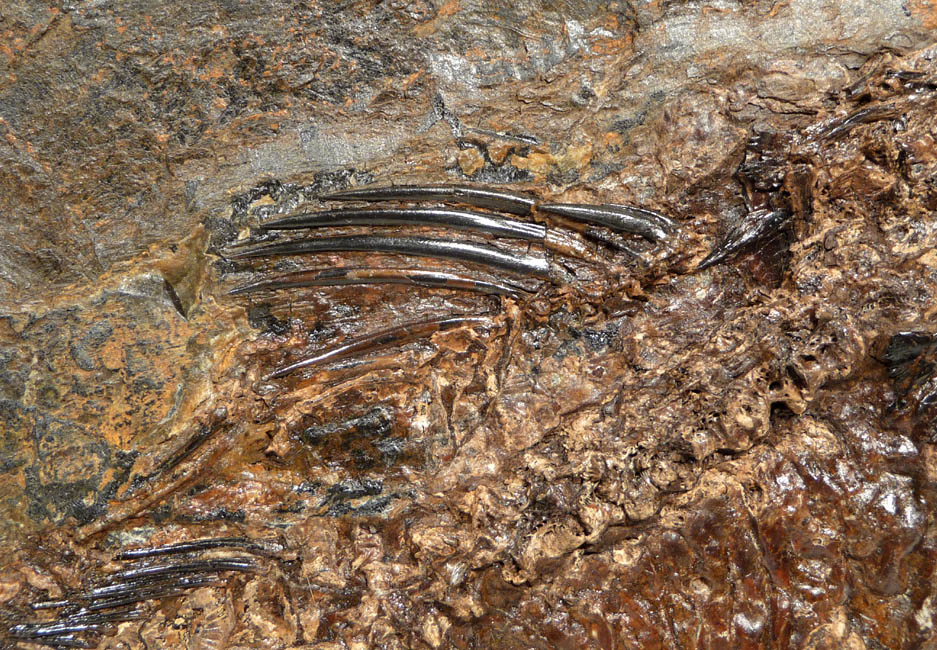 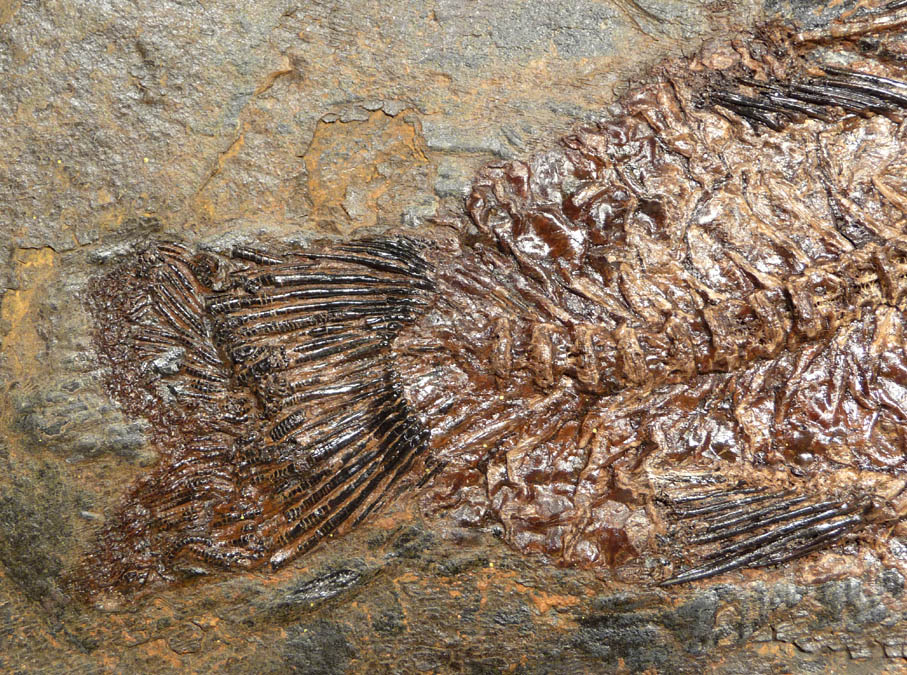 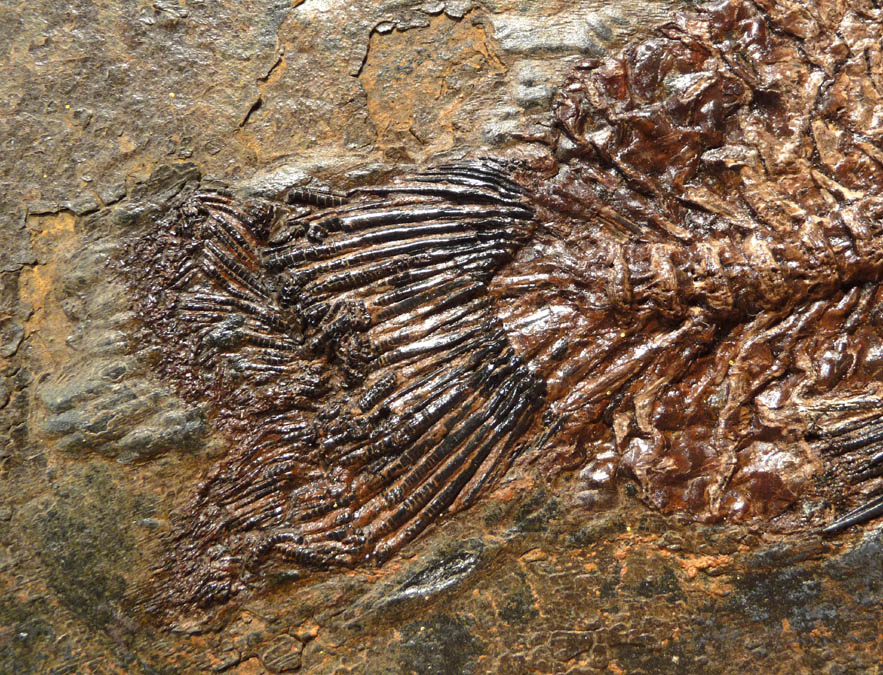 - text and images by Time Vault Gallery, protected by copyright