The extinct Giant Deer, known both as Megaloceros (and Megaceros) giganteus, went completely extinct after the last Ice Age ended.  The latest remains have been Carbon-14 dated to 7700 years ago.  This animal is also called the "Irish Elk" or "Giant Irish Deer" but it is neither an elk nor exclusively found in Ireland, where it once thrived in the lowlands there, up to 10,500 years ago.

The Giant Deer was the largest member of the Cervidae (deer family) that ever walked the planet.  It stood over 10 feet at the shoulders and males had massive antler racks that spread over 11 feet in width.  Like deer of today, these antlers were shed annually.  These beasts are estimated to have weighed between 800 and 1000 pounds.  The design of the antlers varied considerably between each Giant Deer but all had flat broad regions with projecting pointed tines.  Only the males possessed antlers.  The impressive racks functioned in two ways:  to intimidate rivals and impress potential mates, as well as for fighting other males.  The antlers were naturally designed as well-engineered weapons that were both deadly and able to sustain heavy impact when thrust against another rack.  Two fighting males would strike each other in an attempt to gouge the enemy with their heavy, sharp antler tines.

Large herds of Giant Deer roamed Europe and Western Asia during the last Ice Age where they were hunted by large cats, wolves and Primitive Man.  Genuine fossil remains are seldom found today.  The largest known deposits of Giant Deer fossils have been found in peat bogs in Ireland.  In the earlier centuries, remains were able to be located beneath the turf as it was harvested by hand.  Today, the peat is extracted with machinery which damages the fossils and complicates discovery.  Furthermore, despite these deposits, Giant Deer fossils are protected in Ireland and off-limits to export.  While the Giant Deer lived in other parts of Europe besides Ireland, preserved remains are a rare and prized find.  Both names, MEGALOCEROS and MEGACEROS are interchangeably used. 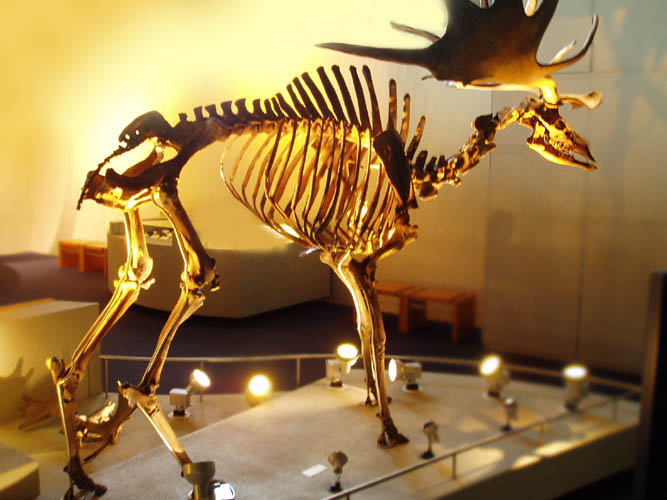