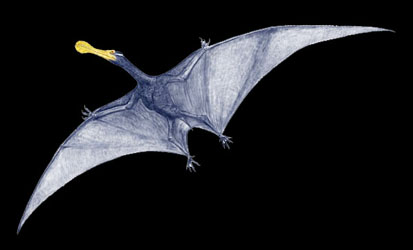 The Pterosaur was a flying reptile (commonly referred to as Pterodactyl "wing finger") of the order Pterosauria.  They are mistakenly sometimes referred to as dinosaurs but they are not, instead being classified as flying reptiles.  They existed from the late Triassic to the Cretaceous Periods (228 - 65 million years ago) with the earlier Triassic species having long, fully toothed jaws and long tails.  The later forms had a stump for a tail, no teeth and a jaw more like a beak than the elongated jaw of the earlier species.

At least 60 genera of pterosaurs have been found with sizes ranging from a sparrow to monsters with wingspans in excess of 40 feet!  Most had elongated heads and most likely fed on fish from aquatic sources amongst the environments they inhabited, much like modern pelicans.  Many recent discoveries are coming to light of exotic large pterosaurs with fancy, elaborate crests on their heads.  Some of these crests are made up of both keratinous material and bone.  No doubt these crests were used in flight for aerodynamic guidance.  These crests could have been brightly colored as a means of display for mating and show.      The wings were thin membranes of skin, similar to the wings of bats, and extended along the sides of the body.  They were attached to the extraordinarily long fourth finger of each arm.  The bones were hollow and had openings at each end.    Unlike typical reptiles, pterosaurs had a breastbone that was developed for the attachment of flight muscles and a brain that was more developed than comparable dinosaurs and other reptiles of similar sizes.

There is no fossil evidence of feathers but some pterosaurs were covered with a hair-like filaments called pycnofibre.   Most researchers now believe that pterosaurs were adapted for active flight, not just gliding as was earlier believed. Because pterosaurs are such advanced and highly developed fliers, no known predecessors exist or have been described making their ancestry an evolutionary mystery.