The most famous dinosaurs of all time are undoubtedly the large meat-eating members of the Tyrannosauridae family.  This family includes beasts such as Nanotyrannus, Albertosaurus, Gorgosaurus, Daspletosaurus, Tarbosaurus, and of the most infamous of all, Tyrannosaurus rex.  The emergence and subsequent extinction of all tyrannosaurids was short-lived and occurred in only a 15 million year span in the Late Cretaceous Period.  The first reasonably complete skeleton of Tyrannosaurus was discovered in Montana, U.S.A. in the year 1902.

Scientific arguments are ongoing today with differing understandings of the feeding behavior of tyrannosaurs.  Some argue their immense size, musculature, lack of usable forelimbs, and olfactory abilities make them more suited as scavengers.  Still, most of the arguments FOR scavenging are also supporting or irrelevant arguments in the defense of these giant creatures being predators.   Absolute evidence is still lacking for a definitive answer.  It is most likely that tyrannosaurs engaged in both predation and scavenging as it would have taken an extraordinary amount of flesh to sustain these massive creatures and any and all meat would have been a welcome meal.  One thing is for sure, whether scavenging a carcass or ambushing an unsuspecting victim, nothing that walked the Earth would have messed with a tyrannosaur.  In their time, they had no equal. 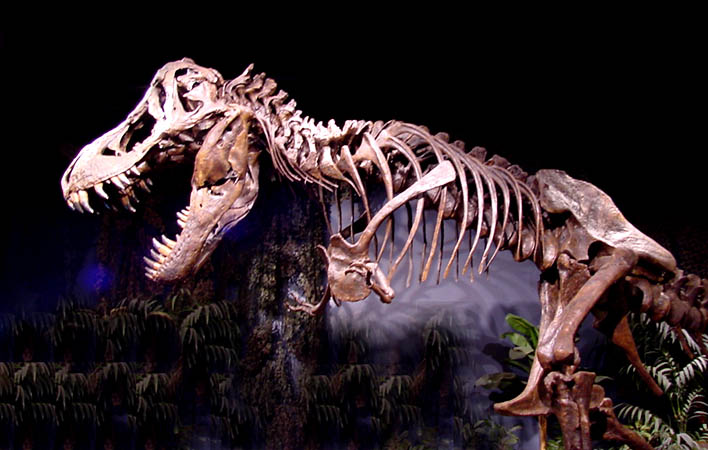 An aspect that is not in dispute is the powerful muscular / skeletal anatomy of tyrannosaurs and their impressive size in the larger types like T. rex.  Tyrannosaurs had well-developed belly ribs that possibly could have supported the dinosaur's weight as it rested on its underside.  Its tail was long and robust, serving as a perfect counterbalance to its massive head.

Tyrannosaurs had a distinctive two-fingered hand instead of the more common three-clawed type.  Their arms were strangely dwarfed and thin, appearing useless.  Their skulls were large in comparison to their body size, and they possessed extremely powerful jaws.  The design of the skull bones enabled it to absorb great stress without damage.  The large curved teeth were serrated and thicker than other typical theropod teeth of laterally compressed design.  This enabled the teeth of tyrannosaurs to puncture thick hide and tendons, crush bone with ease and hold up under the extreme bite force of the jaw muscles.

Fossils of tyrannosaurs have been found in North America and Central Asia.