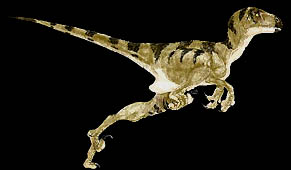 The dromaeosaurs are popularly known (especially in the movie "Jurassic Park") as "raptors", a group of fascinating extinct creatures.  They were a group of meat-eating small to medium size bird-like theropod dinosaurs.  Dromaeosaurs first evolved in the Early Cretaceous and survived right up to the end of the Late Cretaceous suggesting they were adaptable and capable hunters, surviving such a prolonged period yet, remaining virtually unchanged in overall design.  Isolated fossil teeth have been discovered as early as the Middle Jurassic Period from England but the lack of any skeletal remains should preclude making scientific statements about their definitive existence at this earlier time.

Raptors ranged in size from about the size of a  small dog on up to 20 feet long with some remains of Utahraptor indicating this dromaeosaur exceeded 35 feet in length!  They are theropods that possessed specialized features: a well-developed slashing talon on their second toe, a stiffened tail, and large grasping hands.

The "killing claw" of raptors was a terrifying and incredibly efficient weapon.  As they moved, it was held off the ground and fully retracted.  When the muscles of the toe  were contracted, the claw swept down quickly, providing for a powerful slash that may have been able to disembowel prey swiftly.  The stiffened tail would have been good to stabilize the body while the grasping arms and jaws held onto the prey for balance.  It has been suggested that raptors could have performed leaps onto large prey and used all four limbs to rip wounds in them.

Raptors were ferocious predators that some scientists believe hunted in packs and attacked much larger dinosaurs by slashing their underbellies.  It is also believed that they were similar to lions in predatory behavior, preferring ambushes and quick chases using their high maneuverability along with strategic pack-hunting tactics.  A human could be torn to shreds by a pack of raptors in less than 30 seconds.

Recent discoveries in China have shown feathered species existed.  Some remains have been found fully covered in feathers and with developed wings.  Others even had what appear to be secondary gliding wings on their legs.  This has revolutionized paleontologists' view of what not only these creatures could have looked like when alive, but of possible plumage on other theropod dinosaurs.  Dromaeosaurs share other characteristics with birds and theories now place these vicious predators as being the earliest ancestors of birds.