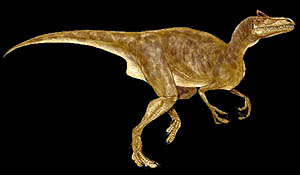 Discovered and identified in 1995 in southeast Morocco, this predator was named for its amazingly delicate, long limbs and apparent high-speed mobility.  Deltadromeus agilis is a meat-eating theropod dinosaur first described as a coelurosaur  but later studies have shown it to be more like a ceratosaur.  The enigma of this dinosaur is that the specimen found was found without a head preventing better diagnostic examination.

With the skeleton reconstructed, Deltadromeus agilis was about 25 feet in length and is 8 feet high at the hip.  Estimated weight when the creature was alive is 3.5 to 4 tons.  Deltadromeus approaches the size of Tyrannosaur yet, was a swift and agile hunter with a body profile and other characteristics similar to much smaller dromaeosaurs hence the nickname, "River Raptor".

Fossil crocodile teeth, turtle shell, crayfish, petrified wood and many dinosaur footprints were found near the sites of the skeleton.  This is evidence that the now scorching Sahara Desert was once a vast flood plain laced with rivers edged by coniferous trees.  Crocodiles and turtles swam the rivers and predatory dinosaurs including Deltadromeus, ran through the mud leaving dozens of three-toed tracks that can now be found in the fossilized sedimentary rock in that region.  Remains of Deltadromeus agilis have only been found in Morocco.

SPECIAL NOTE:  Many fossil dealers have been selling small (1 inch and less in length) Dromaeosaur teeth as teeth of Deltadromeus for much higher prices than they would fetch if there were correctly attributed to Dromaeosaur.  Despite a head never being found with the Deltadromeus skeleton, Deltadromeus was a ceratosaur and we do know what ceratosaur teeth should look like.  The shape and size of these dealer mislabeled teeth are wrong for this dinosaur.  You don't have to have a doctorate in paleontology to understand that a 25 foot meat-eating theropod the size of a juvenile T. rex did NOT have teeth slightly larger than a dime!!