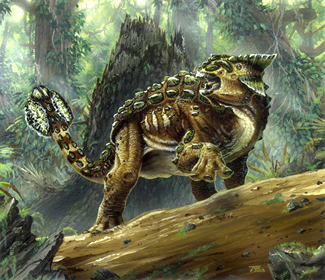 The skeletal and armor design of an ANKYLOSAUR makes them the "walking tanks" of prehistory.  With an array of armor plates, knobs, spikes, scales, multiple bone layers and in some, a tail club, ankylosaurs relied on protection rather than speed to avoid falling victim to the top predators of their time.  Of these armored dinosaurs, there are two sub-groups of the ankylosaurs.  First the NODOSAURIDS appeared in the Middle Jurassic and survived into the Cretaceous.  By the Early Cretaceous, the ANKYLOSAURIDS emerged and existed all the way to the end .  The most notable difference between the two is that nodosaurs lacked horns on their head and a tail club while ankylosaurs possessed both.

Ankylosaurs include several different species spanning many world regions.  Sizes range from 8 feet on up to 33 feet in length and weighing up to 2 tons.  They all walked on four feet and were very slow in their locomotion.  Ankylosaurs were herbivorous, ornithischian (bird-hipped) dinosaurs.  They had toothless beaks and small leaf-shaped teeth that lined the sides of their jaws. The most dominant characteristic of ankylosaurs is the presence of extensive bony armor plating.  Normally moveable portions of the skeleton found in other dinosaurs were fused in ankylosaurs.  Most remarkable is the multiple layers of bone armor that covered the skull.  Even the eyelids of ankylosaurs were bone!  With such an impregnable design to the skull, it is likely that an ankylosaur could have survived any attack to its head region.  The most famous part of anatomy of the ankylosaurids is their heavy tail club made up of several heavy fused bones.  Massive muscles and tendons provided strength and power to the wielding of this defensive mechanism against large theropods such as Tyrannosaurus rex.  Without a tail club, the probable defense of nodosaurids was to hunker down and wait out an attack like a turtle, relying rather, on its spikes and armor for protection.