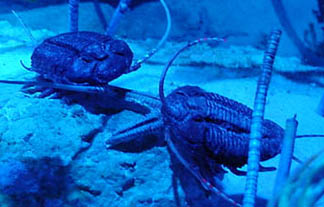 Trilobites are hard-shelled, segmented creatures that lived hundreds of millions of years ago in the Earth's ancient seas.  They are considered to be one of our planet's earliest complex life-forms and are one of the key signature creatures of the Paleozoic Era.  Trilobites went extinct before dinosaurs even existed.  The name 'TRILOBITE' means 'three lobed" and is derived from the fact these animals had bodies featuring three longitudinal lobes, not lateral (head, body, tail) as is often thought.  The lateral division of three parts is shared by many arthropods, not just trilobites.Trilobites were one of the most successful of all early animals, roaming the oceans for over 270 million years, and were the single most diverse group of extinct organisms that ever existed.  Trilobites are believed to have had a variety of life behaviors.  Some moved over the sea bed as predators, scavengers, or filter feeders while some trilobites swam, feeding on plankton.  Most lifestyles expected of modern marine arthropods are seen in trilobites.  Some trilobites, particularly the family Olenidae, are even thought to have evolved a symbiotic relationship with sulfur-eating bacteria from which they derived food.  The smallest known trilobite is just three millimeters long, while the largest type grew to a length of 70 centimeters (over two feet long!).

Trilobites were among the world's first arthropods, a phylum of hard-shelled creatures with multiple body segments and jointed legs (although the legs, antennae and other finer structures of trilobites only very rarely are  preserved).  They constitute an extinct class of arthropods, Trilobita, that is comprised of over 17,000 known species.  It has been reported that every year, four to five new species are discovered in the Atlas and Anti-Atlas Mountain regions in Morocco, alone!  This desolate northern fringe of the Sahara Desert was once covered by a prehistoric ocean and its fossil deposits can be considered amongst the world's richest and most diverse source of these ancient sea creatures.  By the time trilobites first appeared in the fossil record, they were already highly diversified and geographically dispersed. Because trilobites had wide diversity and an easily fossilized exoskeleton, they left an extensive fossil record, with some 17,000 known species spanning Paleozoic time. The study of these fossils has facilitated important contributions to biostratigraphy, paleontology, evolutionary biology, and plate tectonics.

Much of what we hypothesize about trilobites comes from our knowledge of modern arthropods and marine crustaceans.  Scientists believe they reproduced sexually, molted and underwent a series of life stages.  We know trilobites lived in a variety of marine environments over the course of their existence on our planet.  Feeding habits are believed to have been varied including predators, scavengers, filter-feeders and parasites, depending on both type of trilobite and life stage.  The majority are believed to have been predator / scavengers due to the presence of a calcified mouthpart called a 'hypostome'.  Rare fossils of trilobites showing detailed preserved anatomy under the carapace indicates they had a series of jointed legs and gill structures. Considerable study has been done on trilobites as a whole organism.  Even more fascinating though, is the research done on a microscopic level with regards to trilobite morphology.    Radiographs have captured incredible detail of complete and fully articulated antennae and underparts like legs and gills, preserved in the host rock of some fossilized specimens.  Perhaps the most impressive and classic feature of trilobites that comes to mind is the eyes.  Microscopic studies of trilobite eye structures have also revealed marvelous adaptation and very high degrees of specialization in vision.

For such a long-lasting group of organisms, it is no surprise that trilobite evolutionary history is marked by a number of extinction events where some groups perished and surviving groups diversified to fill ecological niches with comparable or unique adaptations.  Generally, trilobites maintained high diversity levels throughout the Cambrian and Ordovician periods before entering a drawn-out decline in the Devonian culminating in final extinction of the last few survivors at the end of the Permian period.

The most common fossil of trilobites is the mineralized dorsal exoskeleton of the creature.  This is found in partial form from molting (shedding the shell as it grows) or in complete form when the animal was buried and died intact.  The soft parts of the underside are rarely preserved.  Trilobite fossils are collected by locating a fossil-bearing layer in rock and then breaking boulder or splitting rock sheet to reveal a cross-section of the preserved trilobite carapace in the break or to reveal an imprint in the sheet.  Once the fossil is located, the pieces are then reassembled and delicate preparation then ensues to remove the surrounding rock above and around the trilobite to expose the fossil.

Written descriptions of trilobites date possibly from the third century BC and definitely from the fourth century AD. The Spanish geologists Eladio Liñán and Rodolfo Gozalo argue that some of the fossils described in Greek and Latin lapidaries as scorpion stone, beetle stone, and ant stone, refer to trilobite fossils. Less ambiguous references to trilobite fossils can be found in Chinese sources. Fossils from the Kushan formation of northeastern China were prized as inkstones and decorative pieces.

In the New World, American fossil hunters found plentiful deposits of Elrathia kingi in western Utah in the 1860s. Until the early 1900s, the Ute Native Americans of Utah wore these trilobites, which they called pachavee (little water bug), as amulets.  A hole was bored in the head and the fossil was worn on a string.  According to the Ute themselves, trilobite necklaces protect against bullets and diseases such as diphtheria.  In 1931, Frank Beckwith uncovered evidence of the Ute use of trilobites. Traveling through the badlands, he photographed two petroglyphs that most likely represent trilobites. On the same trip he examined a burial, of unknown age, with a drilled trilobite fossil lying in the chest cavity of the interred. Since then, trilobite amulets have been found all over the Great Basin, as well as in British Columbia and Australia.

In the 1880s, archaeologists discovered in the Grotte du Trilobite (Caves of Arcy-sur-Cure, Yonne, France) a much-handled trilobite fossil that had been drilled as if to be worn as a pendant. The occupation stratum in which the trilobite was found has been dated as fifteen thousand years old. Because the pendant was handled so much, the species of trilobite cannot be determined. This type of trilobite is not found around Yonne, so it may have been highly prized and traded from elsewhere.

It seems that the more we learn about trilobites, the unfolding of their mystery is stranger than fiction.  Certainly we gain a greater appreciation with each new discovery of these strange and highly advanced but now extinct 'butterflies of the ancient seas'.   - text and images copyright protected 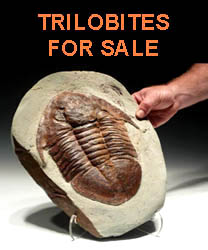