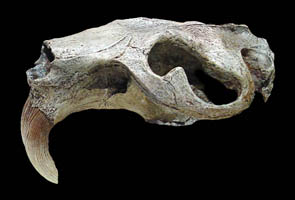 During the last ice age in North America, the giant beaver, known as Castoroides ohioensis, was the largest rodent in existence.  Fossil remains of this animal have only been found in North America.  Unlike depictions of cave walls left by primitive man of other ice age creatures like Woolly Mammoths and Cave Bear, there is no evidence of what the giant beaver looked like when it was alive.  Because the skeleton is similar to that of the modern day beaver aside from its much more massive dimension, we can fairly well assume that the giant beaver looked like a present day animal, only much larger.  Skeletons of Castoroides ohioensis have been found to be the size of a black bear!  At this size, the giant beaver is estimated to have weighed well over 400 lbs, nearly EIGHT TIMES the weight of a modern beaver!

The most famous feature of these huge ice age rodents was their four prominent cutting incisors.  Unlike modern beavers, the incisors of the giant beaver were massive and deeply grooved.  Based on where fossil remains have been found, it is believed giant beavers preferred to live in lakes and ponds bordered by swamps.