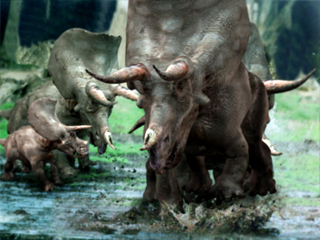 The horned ceratopians (also called ceratopsians) evolved late in the Cretaceous Period and were the last group of ornithischian (bird-hipped) dinosaurs to evolve before succumbing to a mass extinction after only 20 million years of existence.  During their short reign, the great horned dinosaurs developed into a variety of fascinating species.  To this day, all fossil remains of these creatures have only been found in western North America.

Horned ceratopians were extravagantly well-armored in their head region.  Their skulls were heavy and armed with long, pointed horns.  Extending off to the rear was a great sheet of heavy bone called the "frill".  On some horned ceratopians, this was a solid sheet and likely served as a shield to protect the neck and even shoulders.  On other types, the frill was an open framework of bone that was covered with skin, possibly acting as a heat shield or for social display.  The edge of the frill on most horned ceratopians was armored with blunt, triangular spikes called epoccipitals.

One of the largest of these magnificent dinosaurs, the Torosaurus, did not have any epoccipitals on its frill edge but rather a smooth, slightly wavy surface.  Perhaps the extra protection wasn't needed - the sheer massive size of this 25 foot creature might have been enough to make any other dinosaur think twice before starting a fight. 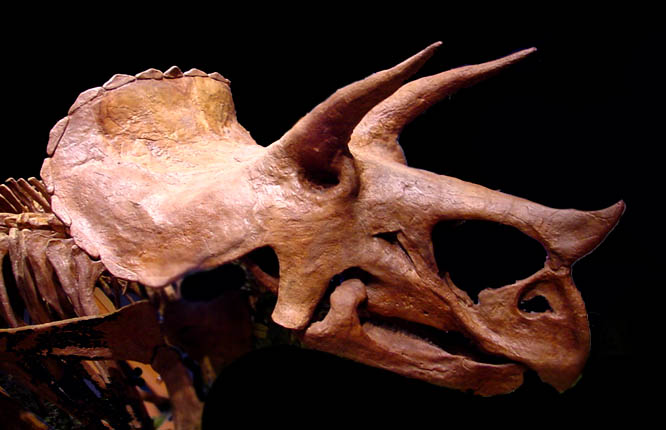 These horned dinosaurs had another very unique feature, they all had a large and powerful parrot-like beak at the front of their mouth.  These dinosaurs were plant-eaters.  Their chopping teeth and powerful jaws allowed them to grind up even the toughest vegetation that most other creatures would have passed up.  At the peak of their existence, dense shrubby flowering plants similar to magnolias were emerging as a common vegetation and most likely a favorite food source.  Large bone beds littered with dozens of fossilized ceratopians indicate they lived and traveled in herds.
Horned ceratopians are divided into two evolutionary lineages:  those with short frills and prominent nose horns, and those with long neck frills and very large brow horns.

Triceratops is the most famous of the great horned dinosaurs.  This group has been found in the fossil record in greater abundance than all the other varieties.  A full grown Triceratops is estimated to have weighed 11 tons, heavier than a modern African bull elephant.  Its skull was 6.5 feet long with a pair of brow horns that exceeded 3 feet in length.

Many of these dinosaurs' horns, skulls and neck frills have been found damaged or scarred indicating these creatures sparred and locked horns like modern elk as they fought over territory and mates.  Truly, the ultimate use of these formidable horns and armor was defense against the attack of the king of meat-eating dinosaurs of their day, the feared Tyrannosaurus and Albertosaurus.

Horned ceratopian dinosaur fossils have only been found in western North America and Asia.