Words simply cannot do this piece justice.  It is really a specimen that MUST be seen in person.  Standing alongside it is an amazing experience and the detail in the fossil just does not convey in photographs.  Most plant fossil specimens are small so a remarkable specimen as this is truly in a class all its own.  A specimen like this is not only priceless in its scarcity, but the beauty and aesthetic it possesses can turn any interior into an instant shrine to natural history when displayed.  It is a stunning and enormous specimen.  The pleasing warm cream, light brown and gray shale showcases a stunning COMPLETE BRANCH of a Pecopteris sp. fossil tree fern, with all its fronds.   Very few fossils like this are found on our planet and one that is as attractive as it is rare is nothing short of a masterpiece of our planet's natural history.  Immeasurably more rare than the fossil palm fronds from the MUCH later Eocene Period, you see offered on a regular basis from the Wyoming, USA, Green River Formation!

Pecopteris was a prehistoric giant tree fern that on average, grew to a height of around 13 feet.  A photograph at the bottom of this page demonstrates what this tree fern might have looked like nearly 300 million years ago, before the first dinosaurs.  Fragments of fossil tree fern branches are common but a COMPLETE giant tree fern branch with the main stem and radiating fronds, is scientifically an incredibly rare occurrence.  The fossil is on a rock that was rather frangible and necessitated having the fern removed in numerous pieces and the pieces reconstructed.  Damage due to extraction and repair required about 15% - 20% restoration of destroyed leaves and fronds.  The entire fossil has also been sealed to stabilize the fragile layers in many areas to protect the fossil from fracturing and to increase contrast to show off the detail.

The overall thickness of this slab is approximately 1 inch and has been reinforced with steel and epoxy.

With the majority of large plant fossils coming from the Eocene deposits of the Green River Formation in North America, a plant fossil of this magnitude and completeness, coming from the Permian Period, puts in in a class all its own.  The fern fossil comes from a time BEFORE the first dinosaurs and the geological era it dates to, marks the most dramatic planetary extinction event in history. 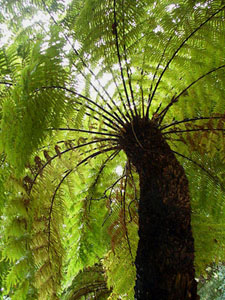