This important and exceptional Neolithic flint stone tool set was collected from an Early Neolithic Period settlement site once inhabited by people of the Linear Pottery Culture (Linearbandkeramik or LBK).  These tools were fashioned thousands of years ago out of flint mined from a large nearby deposit in Ryckholt that is considered one of the "crown jewels" of West European Neolithic mining sites with regards to its importance and extensiveness.  The Neolithic people of the LBK culture represented the first farming and stock-herding society in Western Europe.

These flake tools are fine examples of the various Neolithic typologies of Europe.  What is rare is the inclusion of a tanged projectile point in the set.  The point has been used and the tip is missing in ancient times but even such a specimen is very uncommon in European Neolithic collections.  There is also a pair of flake knives, one exceptionally large.  Cutting edges show use wear and each specimen has a nice patina from burial.  Excellent teaching or reference set   NO REPAIR, NO MODERN RE-FLAKING AND NO RESTORATION.  Genuine tools from the Linear Pottery Culture are seldom available for public sale and represent an excellent opportunity to acquire a genuine stone tool artifact from some of the world's first farming peoples!

The earliest food-producing communities to appear on the North European Plain were those of the Linear Pottery Culture  (Linearbandkeramik or LBK), which had also colonized the loess belt across central Europe between 5400 and 5000 B.C..  This cultural horizon spread rapidly over large parts of Central and Western Europe during the middle of the sixth millennium BC.

Permanent settlement is an important feature of these early agriculturalist societies, often providing clear evidence of plant and animal domestication.  These peoples built massive timber longhouses for shelter demonstrating the technological advances made during the early Neolithic.  Artifacts are often found in or around these dwellings, notably figurines, decorated pottery, carved bone and stone tools.

The ceramics, flint tools, and ground stone tools found on the Linear Pottery sites of the North European Plain are essentially similar to those found elsewhere in east-central Europe.  Unlike the large Linear Pottery sites of the loess belt, substantial longhouses have not been found in the lowlands.  Instead, most of the lowland Linear Pottery sites are relatively small collections of shallow pits.  The pits often have dense concentrations of refuse with relatively large shards and many reconstructable vessels.  All the same, they do not appear to represent the same level of commitment to particular settlement locations as do the longhouse settlements of the loess belt. 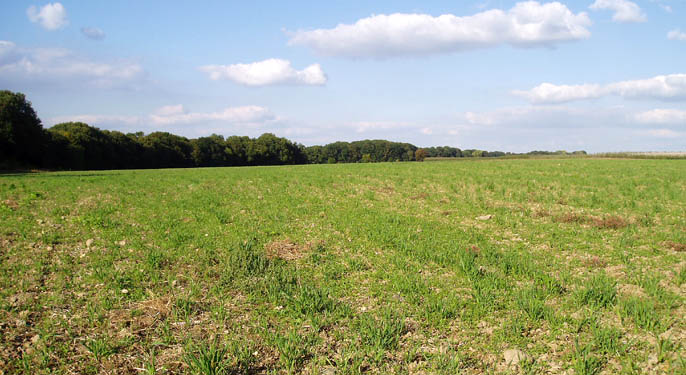