Dated to 1813 AD, this antique bronze Christian holy bread seal (sfragida) stamp was used to imprint the holy message in the center of a large circular prosphoron or Eucharist bread loaf before baking.  During preparation of the Eucharist, the priest conducts the proskomithi in which he first cuts out the center of the stamped design that says "IC,XC, NIKA (Jesus Christ Conquers).  It becomes the Body of Christ (the Lamb).  In the ancient Tradition of the Orthodox Church, Holy Mystery of Communion is carried out through the mediums of wine and leavened bread. The bread is specially baked for the purpose of communion, and it is called "Prosphora" (meaning "that which is offered" in Greek.)

This holy bread stamp would have had a cross protruding up from the back side to hold as a handle, now lost to the ravages of time.  It was found in Bulgaria and the back side where the cross was attached, has a date of 1813 and several names of saints engraved into the bronze surface.

A fascinating and still functional antique stamp that once served an important role in the Church and traditional Christian liturgical practices, still performed today.

A prosphoron is a small loaf of leavened bread used in Orthodox Christian and Greek Catholic (Byzantine) liturgies.  The plural form is prosphora (πρόσφορα).  The term originally meant any offering made to a temple, but in Orthodox Christianity and Byzantine Rite Catholicism it has come to mean specifically the bread offered at the Divine Liturgy (Eucharist).

The baking of the prosphora may only be performed by a believing Orthodox Christian in good standing—having preferably been recently to Confession, and is accompanied by prayer and fasting.  Before baking, each loaf is formed by placing two disks of dough, one on top of the other, and stamping it with a special liturgical seal.  The prosphora should be fresh and not stale or moldy when presented at the altar for use in the Divine Liturgy.  Often several prosphora will be baked and offered by the faithful, and the priest chooses the best one for the Lamb (Host) that will be consecrated.  The remaining loaves are blessed and offered back to the congregation after the end of the Divine Liturgy (Eucharist); this bread is called the antidoron (αντίδωρον, antídōron), i.e. a 'gift returned', or 'in place of the gifts'. 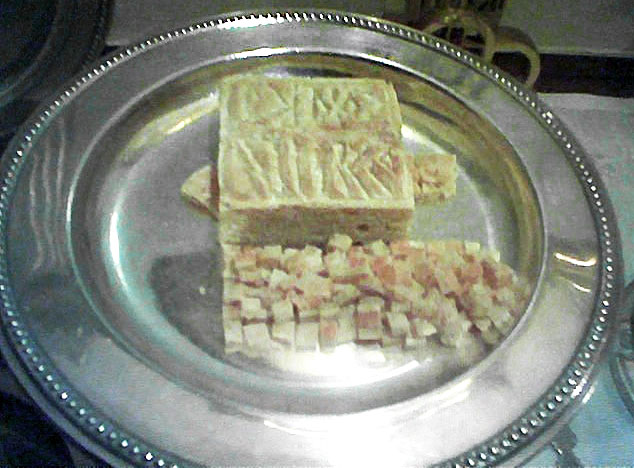