Genuine ancient Bronze Age swords from Ireland are among the rarest objects of the ancient world.  They were prestige weapons of the highest level to the fierce Celtic warriors, and required a great deal of wealth to acquire out of the reach of ordinary Celts.  Their scarcity in ancient times carries forward today where complete specimens are RARELY seen offered for sale, much less so than even rare specimens from central Europe.

This superb, INVESTMENT-CLASS example is remarkable in its condition and preservation.  It survived intact with no breakage or bending to the blade.  The thin lenticular cross-section with sharp edges and tapered point made it an extremely effective weapon for both, slashing and stabbing.  This is classified as a FLANGED-HILT sword, of class 4 type (see references at end of text).  It is identical to several examples found in publications of the Museum of Ireland collection.  As mentioned in scientific publications of these swords, combat damage is often seen and this spectacular example is no exception with an impact nick to the blade on one side, near the tip.  An ancient, functional sword with combat damage holds a story that most antiquities lack, an especially intriguing feature for such a rare piece of ancient militaria!

The golden patina is indicative of this sword being a found in a bog, spring or river - a common "disposal" of ancient weapons by the Celts who often made weapon offerings to the water gods.  Ancient European bronze that is still dark gold to brown is a result of the metal being submerged long-term, in an aquatic environment that prevented ground minerals such as malachite and azurite to interact with the metal to form usually seen green and blue surface encrustations.

Conserved in our lab to preserve the integrity of the metal and allow safe handling.    Be wary of modern copies that plague the antiquity market today.  We subject every artifact we offer for sale to rigorous inspection and authentication in our own museum lab facility.

Around 2000 B.C., barbarian Celtic tribes invaded Europe.  They first inhabited regions across Eastern Europe now known as Hungary, Bulgaria, Romania and the Balkans.  During the Bronze Age, they move westward and by the Iron Age in the 8th to 5th centuries BC, these tribes make their homes in what is now southwest Germany, eastern France and parts of Switzerland and Austria.  This era is known as the Hallstat period named after a Celtic archaeological type-site in a lakeside village in Austria.  After that, in the La Tene period, western Europe becomes heavily occupied by the Celts as they invade much of Germany, France, the Iberian Peninsula (Spain and Portugal), the British Islands and Ireland.  After this time, Celtic tribes spread eastward again, moving into northern Italy, Bohemia, Silesia, the Balkans and even into present day Turkey with a tribe called the Galatians establishing a Celtic city called Galatia.  During the 1st century BC, the Celts were at the height of their power and were the dominant ethnic group in much of Europe, even ruling over the Germanic tribes.   Among the many military victories the ancient Celts can lay claim to are the sacking of the cities of Rome and Delphi.

The Celts were largely a decentralized  military aristocracy made up of independent chieftains ruling various geographical regions.  They were famous to fight just for the sake of fighting and often, they were employed as mercenaries of the great armies of ancient times.  Along with their reputations of  chivalry, courage and maniacal bravery, their more aggressive tendencies were offset by a great sensitivity to the arts and philosophy.  Highly unusual at the time, the Celts viewed both men AND women with equality, holding women in high regard with their matriarchal religion.

One of the famous works the Celts were known for was their masterful works in metalsmithing.  Spectacular works can be found all over Europe left behind by Celtic masters in gold, silver, bronze and later, in iron.  Much of the influence of Bronze Age European metal ornament lends itself to the influence Celtic master craftspeople.

WARNING:  There is an ALARMING number of fake and altered ancient artifacts on the market.  As fine quality intact, original specimens become more scarce and techniques have become more sophisticated to fake these artifacts.  We have personally handled numerous extremely well-done fakes with convincing patinas that could fool most people.  The degree to which the fakers have been able to replicate patina to disguise their work requires an expert examination by highly experienced individuals.  Like all rare collectibles, fakes plague the market.   We subject every piece we offer to a full analysis, cleaning and conservation process in our on-site lab.  How many dealers do this or have any experience in operating their own lab?  The procedures we put each piece through are the same as we do for those specimens destined for museums and the same procedures as the best museums perform on their own collections.  Deal only with sources that are extremely knowledgeable in forgeries or altered pieces and get a written guarantee of authenticity that has no conditions or expiration period.  We include this guarantee in writing with every item we sell.  All purchases should include from the dealer, a written guarantee of authenticity with unconditional and lifetime return policies regarding such guarantee.

See Figures 2, 5 and 7 of Hunting Warriors: The Transformation of Weapons, Combat Practices and Society during the Bronze Age in Ireland 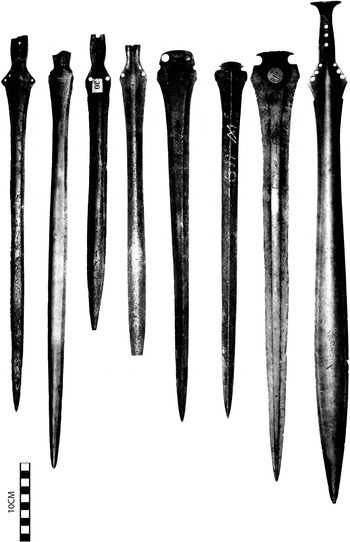 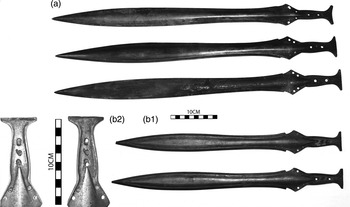