This is a very rare opportunity to acquire the only specimen of this kind we have encountered.  This is a nearly complete lower left mandible of an Ice Age wild boar, Sus scrofa.  It was collected in a cave in the Ardennes Forest with many of the fossils buried in sedimentary chalk that had built up over millennia on the cave floor.  The layer these boar fossils were found was a layer AT THE BOTTOM of a HIGHER layer of Cave Hyena fossils.  It seems that a long-term occupation of Cave Hyena existed and some fed on these boar fossils found in the same deposit.  Juvenile Woolly Rhino fossils were also found associated with these Wild Boar fossils.  These specimens provide an educational example of prey and predator relationships in the final Ice Age of Europe.  The bone was fractured and has been professionally repaired but there is no restoration or fabrication to any part of this fossil.  Because of its rarity, we decided to keep it in this state and since it is nearly complete, any restoration would have demeaned the value and importance of its natural condition.  All the teeth except for the lower tusk, are intact and original.  All teeth were in the jaw when it was collected and have not been assembled as is common for fossil jaws of any animal.  This specimen came from a large male as evidenced by the socket at the anterior of the jaw where a very large lower canine was attached.

Most impressive is the nearly complete hinge which is almost never intact in most fossil jaws of any creature.  The cave that produced this remarkable fossil specimen was relatively dry and the state of preservation of this and all other fossil remains that were collected there, is of the highest degree.  Wild boar remains from the Ice Age are rather uncommon Pleistocene fossils and usually, all that is found is an occasional tusk.  Cave finds such as this, are exceedingly rare and a jaw as complete as this specimen could very likely be the only one like it that an individual collector will encounter in their lifetime! 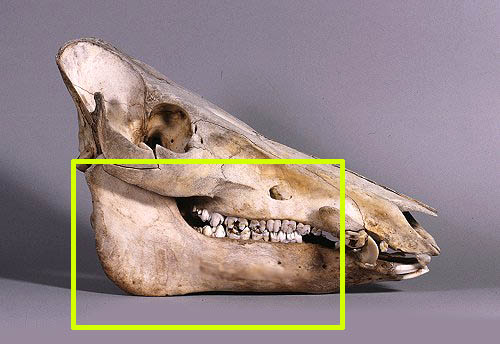