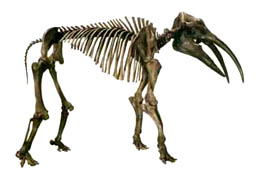 Gomphotheres are strange prehistoric elephants that resembled a Mastodon but with a set of large lower tusks as well as the upper set of tusks the other elephants have.  Their grinding teeth, for example, had many more cusps and more complicated wear patterns than those of mastodons.  Gomphotheres belong to the family Gomphotheriidae, a family within the mammal order Proboscidea that have been extinct since the Pleistocene Period.  Gomphotheres are regarded as the ancestor to the genus Stegodon as well as mammoths and both the present living species of elephants.  Gomphotheres had both upper and lower incisor tusks.  They are sometimes nicknamed "shovel tuskers" for this feature.  Unlike the compact and high domed skull of the mammoths, the skull of gomphotheres was elongate and low.  They seemed well-adapted for a life in lakes and swamps where they used their tusks to dig or scrape up the vegetation.

Emerging 55 million years ago, the group of mammals called proboscideans are identified by the presence of tusks and a trunk.  They comprise three families: Mammutidae, Gomphotheriidae and Elephantidae.  The oldest known proboscideans in North America date back to the Miocene.  Cuvieronius, the last genus of New World gomphotheres to become extinct, was widely distributed in North, Central, and South America.  All elephant species in these regions became extinct 11,000 years ago. 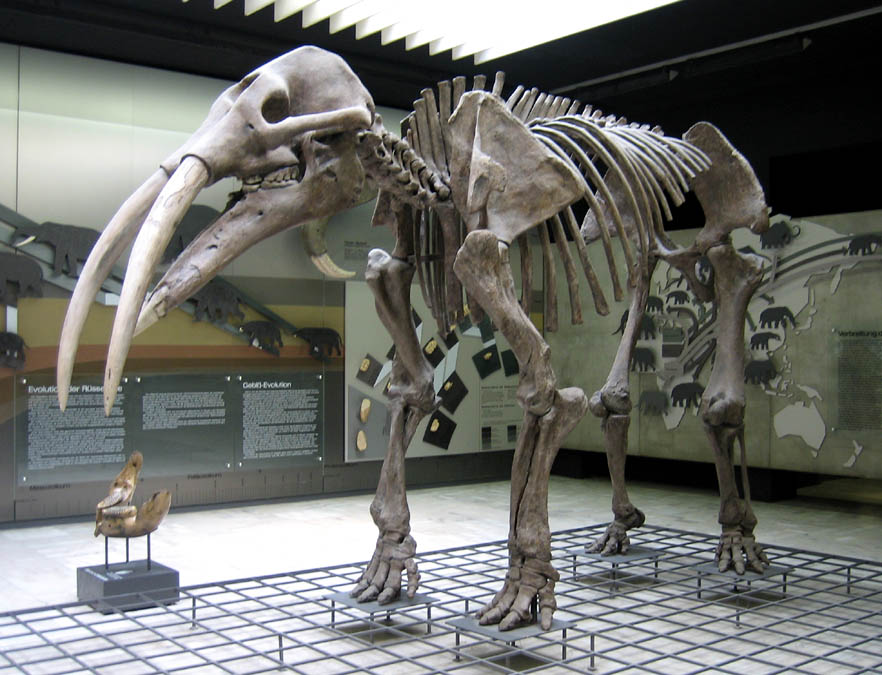 Differences in proboscidean tooth anatomy tell us about the types of food they ate.  The mastodon was more suited for forest environments with teeth that were well adapted for chewing tougher vegetation like twigs, leaves, shrubs, fruits, pinecones, pine needles and mosses.  Gomphotheres likely fed on aquatic vegetation with their complicated, rounded cusp pattern.  The mammoth with its smoother teeth, was best suited for the open plains, feeding on a variety of grasses.

All proboscideans have a system of horizontal tooth replacement whereby new molars erupt from the rear of the jaw and move forward.  The most worn teeth at the front, are pushed out of the jaw.  Sometimes while still in the jaw, the anterior portion of a worn front tooth is broken off.  These partial teeth are found as fossils along with complete specimens.  A baby proboscidean at age 6, will have already had three sets of teeth.  By 13 years of age, the fourth set emerges followed by a fifth set at age 27 years.  The final set of teeth come in around 43 years of age and as it wears away, the animal eventually starves to death and dies on average between 60 and 80 years of age.  Interestingly, the animal's life is limited by the fact that after the sixth set, no new teeth grow in to replace the final worn down set and the animal is no longer able to chew its food.  This characteristic is still true of modern elephants.