This excellent collection of FIVE core-struck Neolithic blade flake knives were collected from the same site in the famous Spiennes Neolithic flint mining and trade region.  All are made of flint and together, make for a spectacular display that displays a fundamental and iconic artifact of the Neolithic Age - the core-struck blade.  The Neolithic site in Spiennes, Belgium was one of the most active and well-known trading centers of the first farming societies of western Europe.  The cores from which blades like this were struck, were mined, prepared and traded from here, to regions all across Neolithic Europe.

Since the 1800's, European collectors have been walking the plowed farm fields of the region, surface-collecting flint Neolithic artifacts that are turned over by the farmers' plows each year.  Unfortunately, that same plow that allows one to make such a discovery, is also responsible for breaking and damaging the flint artifacts.  Finding exceptional and unbroken specimens such as these has become not as common as it was many, many decades ago.

These mines cover more than 250 acres and represent the largest and earliest concentration of ancient mines in Europe!  A large diversity of methods were employed to extract the flint by open quarries, pits and networks of underground horizontal galleries.  Vertical tunnels range from 30 to 40 feet deep.  Shafts were sunk through the chalk layer vertically with galleries radiating out from the shafts.  Unique to Spiennes, when the flint was exhausted above the bedrock, the rock layer was penetrated to reach the chalk layer below.  This feature shows the mastery these Neolithic humans had of their local geology!

Mines were dug with only the aid of antler picks and bone shovels demonstrating an incredible feat based on the expansiveness of the site.  Despite the miners' knowledge to leave pillars in the horizontal galleries for roof support, skeletons of workers have been found in collapsed shafts at Spiennes.

Flint tools from the mining site at Spiennes represent an icon of Neolithic technology, trade and culture.  Every collection should have at least one tool from this official 'world-class' site. 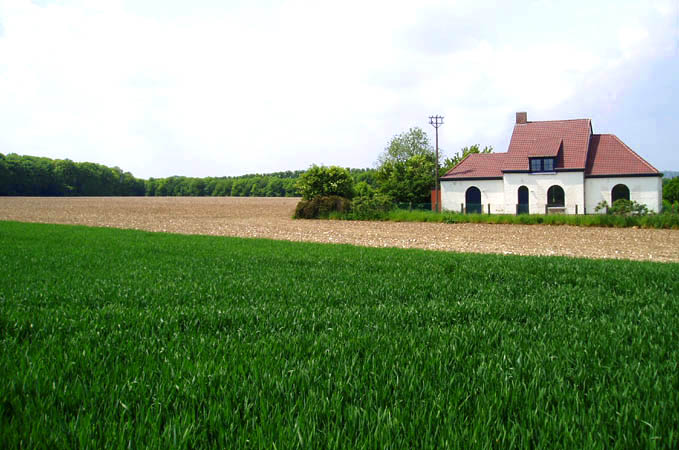 FIELD IN SPIENNES, BELGIUM WHERE THESE TOOLS WERE COLLECTED