This is a choice grade tooth of Edmontosaurus annectens, the predominant hadrosaur species that can be found in the Hell Creek Formation of Montana and South Dakota, U.S.A..  As an unworn crown, it is much less common to find a tooth from these dinosaurs without ANY wear to the cusp.  As the teeth begin to emerge up from the jaw, they become worn to a flat surface on the upper portion of the crown.  This tooth has no wear so it came from a dinosaur that died with this tooth in its jaw!  These kind of teeth are far more rare than more prevalent "spit" teeth that are worn, used-up teeth ejected from the jaws continuously over the life of the dinosaur.  Hadrosaurs were an important part of the food chain as these herbivores were a primary food source for the meat-eating dinosaurs in the same region, namely Tyrannosaurus rex, Nanotyrannus and Dromaeosaurs.  No fossil tooth collection should be without at least one nice complete example tooth to display alongside fossils of the very dinosaurs that terrorized these peaceful beasts of the Late Cretaceous.  Tooth is 100% natural and as found!  NO REPAIR AND NO RESTORATION. 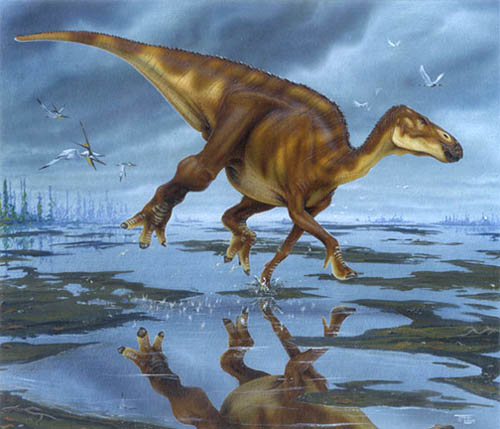 IMAGE BY TODD MARSHALL - COPYRIGHT PROTECTED AND USED WITH PERMISSION