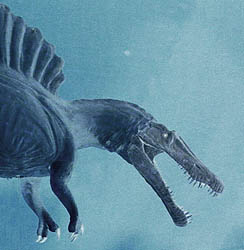 The most common type of Spinosaurus fossil is a tooth.  Like other dinosaurs (and present day sharks), the jaws of a living Spinosaurus dinosaur had its teeth continually growing with old teeth being replaced with new teeth.  Over the life of the dinosaur, hundreds of teeth could be shed from the mouth as new sharp teeth were always erupting to replace worn or broken teeth.  Because of the quantity of teeth being generated in the life of a dinosaur, fossil teeth are the most commonly type of dinosaur fossil found.

Another reason for dinosaur teeth being the most commonly found dinosaur fossil is the teeth are the made of the hardest materials in a dinosaur's body - dentin and enamel.  Soft tissue rarely preserves.  Bone offers a better chance of preserving under the right conditions, but the hard tooth enamel offers the best chance of a tooth surviving for millions of years.

When you hold a real dinosaur tooth, you are holding THE ACTUAL TOOTH that once was in the jaw, made of the same substance that it was made when the dinosaur was alive.  Dinosaur teeth are not petrified, replaced by stone or a cast in stone where the tooth once was.  They can be partially mineralized in the core of the tooth but they are still the same tooth when the dinosaur was living.  If you break one, inside will be the dentin of the genuine tooth and the outside will still have the original layer of enamel as it was when the dinosaur had it in its jaws.  While a fossil dinosaur tooth is durable enough to be safely handled, they are still fragile and can crack or break if bumped against something hard or dropped.