This is the FINEST example we have ever encountered of this scarce denizen of the Messel shales.  It is a museum-class fossil specimen of an extinct Paleoperca proxima fish, a type of perch that once lived in the ancient waters of what is now the Messel Shale Site in Germany.  Paleoperca is a member of the "Higher Bony Fishes" known as the EUTELEOSTEI.  The Messel fossil PERCH are  far more rare comparedto GAR or BOWFIN fish from Messel.  If you wish to exhibit the finest grade fossils from rare locations and / or of rare types, this would be an extremely important example to acquire.  This specimen has exquisite and very rare detail THROUGHOUT the entire fish.  Fin, bone and even soft-body tissue are incredibly well preserved.  The color is 100% natural.  We prepared this example in our lab and can verify its authenticity and the work performed.  A genuine Paleoperca fossil of this quality seldom comes up for sale on the market and when it does, its a rare opportunity that should not be missed by the discriminating collector!  These have to come from old collections as this one did, and so few exist with the quality and detail of preservation of this magnificent museum grade example.

This specimen shows SUPERB 3D high relief preservation with an extremely fine level of intact anatomy one could possibly hope for.  The original, natural color in the fossil is beautiful with extensive preserved skin over the bones and spine.  The fin rays are present with superb detail and with a full tail.  The fossil is  100% GENUINE with NO RESTORATION NOR FABRICATION.  If you curate a public museum or take pride in displaying the finest examples of fossils from this rare site, then this is a MUST HAVE specimen!  It is not only much nicer than typically seen but it is much larger than usually found.  It would be very difficult to nearly impossible to ever find a specimen that exceeds this incredible example!

Prior to the international protection and status of the Messel Pit, private collectors had access to the site and old collection specimens can be found occasionally on the market.  Depending on their quality of preparation as well as preservation and type, fossils from Messel are extremely desirable to acquire and exceptional examples have proven to appreciate in value over time due to the rarity of their availability on the market not to mention the rarity of their natural occurrence.  The Messel Pit represents an extremely rare occurrence in the fossil record hence its fame in the scientific world.  Its fossils are extremely fascinating as well as important specimens in scientific history, and no collector wishing to exhibit an impressive collection should overlook including Messel fossils in their display, when possible.

One of the most scientifically famous fossil deposits in the world can be found at the Messel Pit near Messel, Germany, 35 km southeast of Frankfurt.  The site occupies 70 hectares and the mine pit is 1000 meters long and 700 meters wide.  The ground level of the area surrounding the pit is approximately 200 meters above sea level with the original pit floor extending to a depth of 60 meters.  The oil shale deposits extend further below this floor to an additional 120 to 130 meters.

The site is so rich in a unique array of preserved fauna that it was declared a UNESCO World Heritage site in 1995 and is now internationally protected.  The UNESCO program aims to catalogue, name, and preserve sites around the world of remarkable cultural or natural importance for the common heritage of mankind.  The majority of sites protected under UNESCO are cultural, not natural sites like Messel so its inclusion as a world "treasure" underlines its value and importance to both paleontologists as well as fossil collectors.

The Messel Pit was originally mined for its bituminous shale and this oil shale was actively dug from 1859 to 1971.  After mining operations ceased in 1971, the German government considered filling the open pit mine with garbage and converting the site to a waste dump despite the knowledge of its fossils.  Fossils had been well-known from the Messel site with the first fossil found in 1875 of a well-preserved crocodile and despite the local governments' desire to destroy the site, serious scientific excavations had been taking place there since the early 1970's.  Fortunately, the scientific community was successful in saving the Messel Pit and German legislation was enacted in 1991 and in 1992 to protect it as a national monument.  Later, in 1995, the Messel Pit gained its UNESCO listing and international prominence and protection.

The fossil deposits at Messel date back to the Middle Eocene Period ( Geiseltalian Period) or 50 million years ago.  The site was a former lake during this time.  The surrounding shore region is believed to have been subjected to periodic poisonous gas attacks emerging from the lake bed due to tectonic activity explaining the abundance of well-preserved terrestrial vertebrates near the original lake shore.  The lake was also a deep body of water with nearly zero turbidity at the lower strata.  This deeper part of the lake was also anoxic, that is, it had little to no dissolved oxygen so it could not support any aquatic life-forms that needed to breathe underwater.  This unique set of circumstances meant that any fauna that died in the lake and sunk to the bottom would not have readily decomposed, been disturbed by predators or scattered by water currents.  Combined with very low rate of sedimentary deposition resulted in the extraordinarily well-preserved fossils that are found now.

The Messel flora and fauna represent the finest examples preserved of this period ever discovered.  The quality of preservation is astonishing ranging from preserved soft body tissue and stomach contents of many vertebrate specimens to preserved distinct metallic colorations in its insect fossils.  Whole skeletons are found perfectly articulated and complete with dark regions of preserved hair, feathers and skin.  Original complex prehistoric chemical compositions of the deposit are also still intact allowing scientists to study these "chemical fossils" and thereby reconstruct the paleoecology and paleobiological processes of the site 50 million years ago!  The rich array of specimens includes 40 new species comprising rare mammal (both ground-dwelling and avian), fish, insect, amphibian, reptile and plant remains.  The photos below show some of the amazing examples that have been found in the Messel shale.

Since the oil shales from Messel are fragile and difficult to stabilize in the conservation of the fossils found there, the most common technique for extracting and presenting these fossils is by embedding the fossil in plastic resin on one side for a stable backing.  When the fossil is discovered in the field, resin is mixed and poured over the exposed layer.  The entire fossil with its reinforced resin backing is then removed from the ground and brought back to the lab where it is flipped over and prepared from the rock side which was the former layer facing down.  The preparation is done very carefully with manual tools and in some cases, light air abrasives.  The surrounding rock is removed to expose the layer holding the fossil and if done carefully, soft body tissue and other delicate features can be found preserved intact.  The resin is either colored or left natural and the fossil is stabilized with a clear preservant to prevent damage to its fragile features now that they are fully exposed.

The images below showcase some of the spectacular actual specimens excavated from the Messel Pit that now reside in the Senckenberg Natural History Museum in Frankfurt, Germany -  protected by copyright 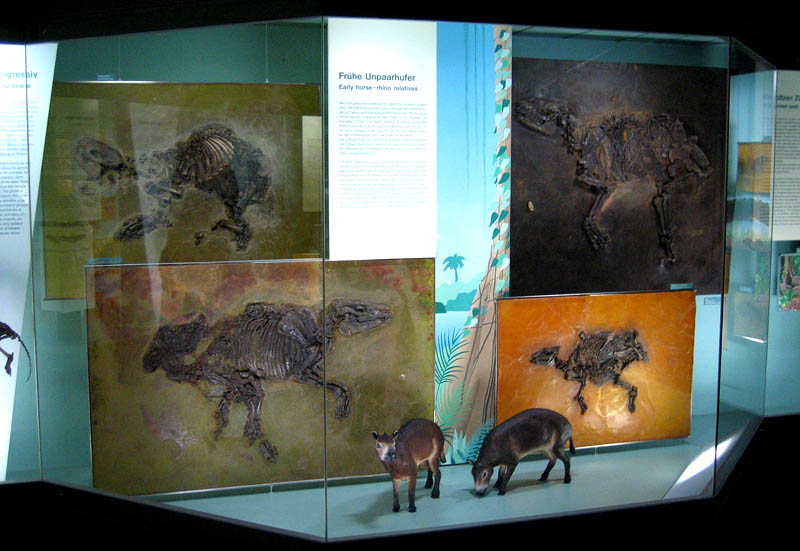 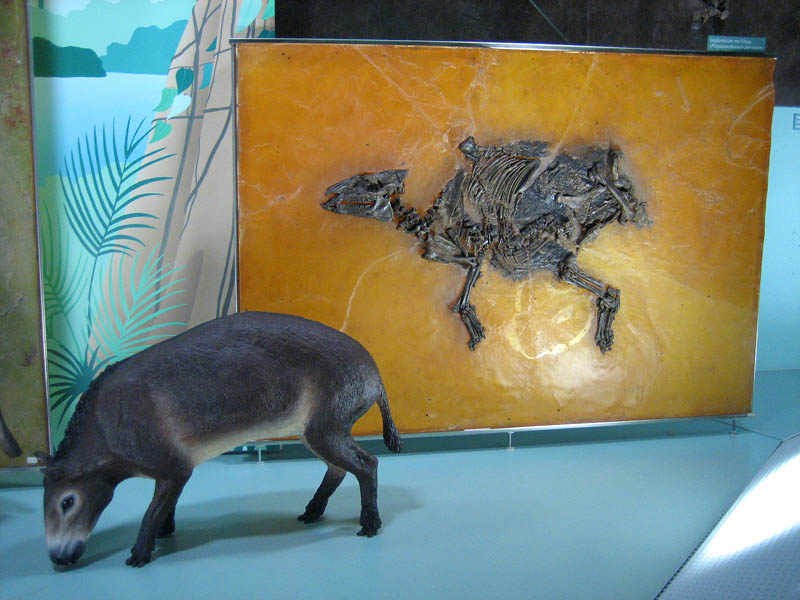 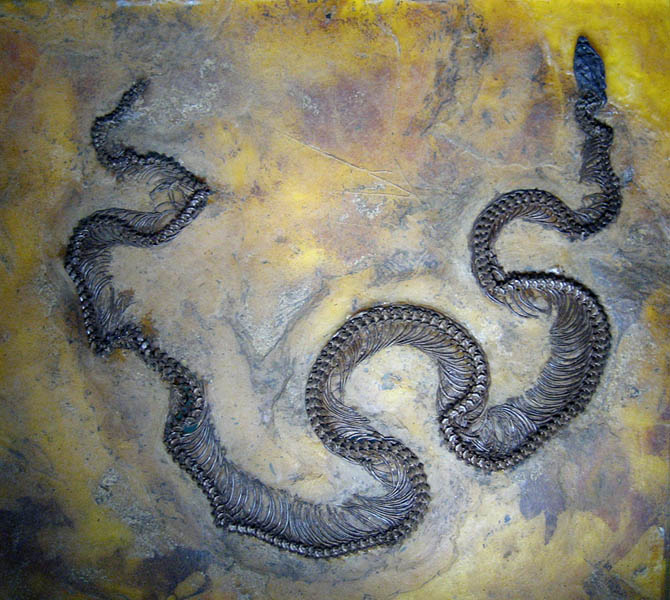 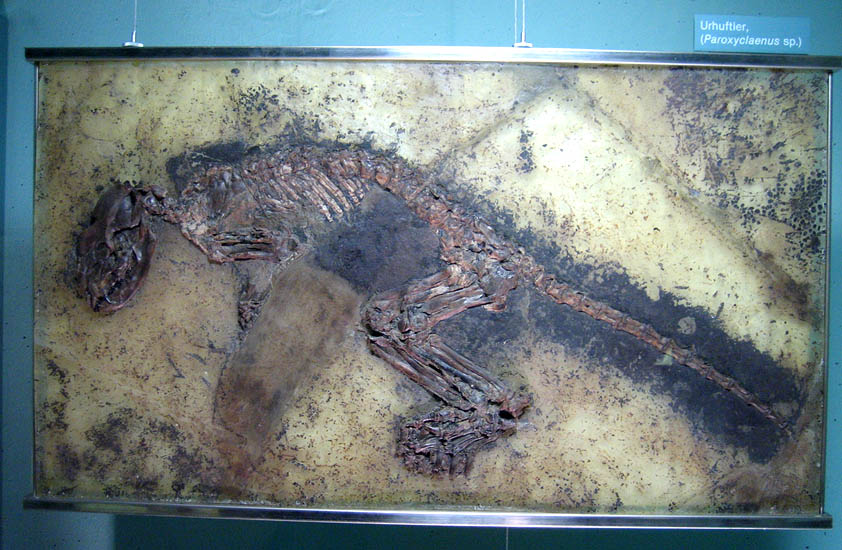 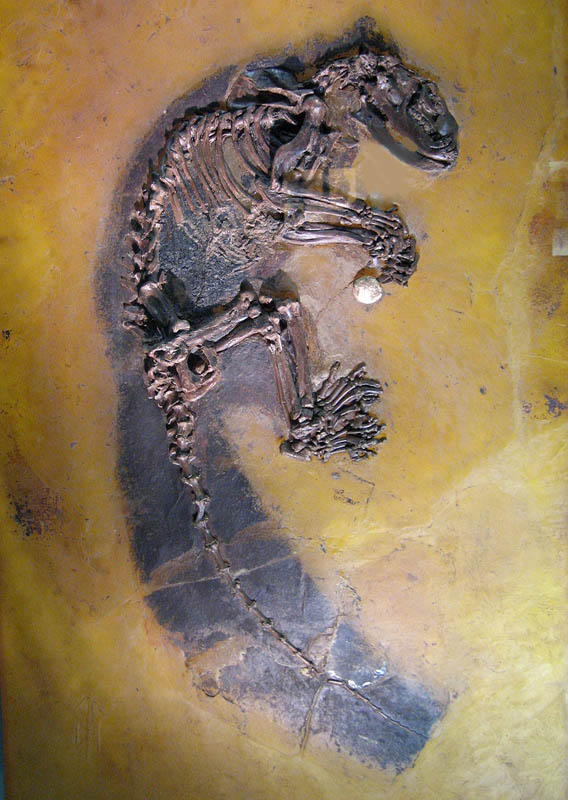 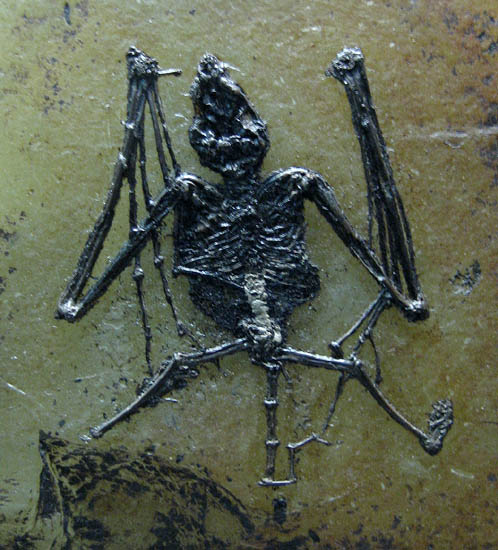