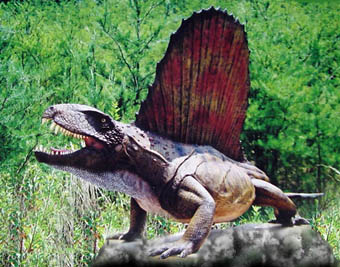 Often shown as one of the most classic pop-culture mascots of the dinosaur days, Dimetrodon is neither a dinosaur nor did Dimetrodon live during the dinosaurs.  Dimetrodon is a pelycosaur (a primitive 4-legged synapsid, or "mammal-like reptile") that went extinct long before the first dinosaurs walked the planet.  With its tell-tale large sail-finned back, there is no mistaking this well-known monster of prehistory.

The name 'Dimetrodon' is derived from the fact that it had two forms of teeth in its jaws, unusual for reptile-like creatures of its time.  There were short teeth at the front and back of the jaws for shearing and chewing as well as long, canine-like fangs just behind the front shorter teeth, for stabbing and holding prey.

Dimetrodon was the largest and most dangerous apex predator on land of its day.  At the top of its food chain, Dimetrodon ate whatever it wanted including other smaller pelycosaurs such as Edaphosaurus and Varanosaurus, as well as other reptiles.  It grew to 11.5 feet in length.  Weight estimates vary but an adult likely weighed around 200 pounds.  It walked on four legs that were spread wide out from its body.  Because of this, Dimetrodon would have walked with a wide sweeping gait, head swinging back and forth like modern day Komodo dragons to which it is sometimes compared to.

The most famous anatomical feature of Dimetrodon is it huge sail protruding from the entire length of its back.  This sail was supported by neural spine processes projecting upward from its vertebrae.  A thin layer of skin was stretched over this elaborate sail.  The sail spines were as high as one third the entire length of its body and approached 40 inches high.  Wide speculation surrounds the purpose of this "sail" on its back.  Some theorize it was brightly decorated and displayed for attracting a mate.  Others believe the sail was an elaborate means of regulating body temperature and aiding to warm the creature on sunny but cooler than desired days.  Still others speculate the sail was used as a warning display to other competing Dimetrodons.

Based on associated fossils of other flora and fauna found with Dimetrodon fossils, we can accurately ascertain the kind of environment Dimetrodon once lived in.  The Permian habitat of Dimetrodon was an arid landscape of scrub-like vegetation and often subjected to droughts.  Small winding streams and shallow pools would have been its only source of water.

Dimetrodon fossils have been found in North America (namely Texas and Oklahoma) and Europe.